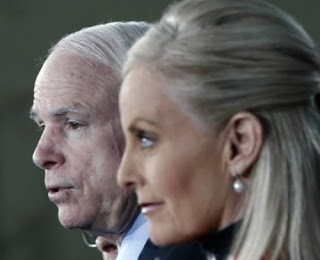 To Americans who watched last night's third and final McCain/Obama debate, it seems the Illionois senator made it 3-0 over "Crash" McCain.

From what I saw of it, McCain was certainly at his best for a while until he lapsed back into default mode - frantic anger. The double whammy for McCain is that, when you get angry and you're that old, you come away looking like the scary old man who sits in his rocker on the porch yelling at the kids playing in the street. McCain's age really makes him look like an Old Geezer, furious but really wobbly, or, as Obama would call him, "erratic."

Republican pundits who were able to overlook the Geezer factor may have been right when they claimed that McCain won the debate on points but that's sort of like saying, "Other than that, Mrs. Lincoln, how did you like the play?"

McCain was clearly out to provoke an "angry black man" response from Obama. A racist ploy? Hell yes. But it didn't work. Obama didn't go for it and, in that, showed himself presidential while McCain showed himself the Old Geezer that he is.

Another thing that became apparent in the second debate and was utterly proven last night is that McCain isn't up to a 90-minute intellectual battle. He's fair enough for the first 30-minutes. After that he runs out of steam and reverts to default, angry old man mode. He just gets so wound up that he loses it.

I think last night reinforced a lot of minds that were already in Obama's camp or leaning that way. As for the Arizona senator it was sad to watch a man who has served his country all his life squander his integrity and debase his character only to come up empty-handed.

I think the White House is Obama's barring the race factor rearing its ugly head on November 4 to derail America's best hope for the future.
Posted by The Mound of Sound at 9:00 AM

Very astute assessment. I thought the same thing about how his demeanor changed after the first half hour.

I don't think McCain's issue last night was a mental or age-related issue. I think he was just choking on anger after about 30 minutes. That to me was extremely disturbing. I think he did better in the Republican group debates because they weren't one on one.

In close quarters last night with a single individual, he was visibly disturbed. What was genuinely disconcerting is Obama was offering pretty standard stuff for a debate. He wasn't going after McCain or provoking him in some excessive fashion. I said to a friend about half-way through that it was clear that McCain could barely contain himself when he knew Obama was providing a solid answer. It was obvious he was just dying to interrupt in some fashion. He looked like he wanted to jump over the table but was instead forced to grimace and "try to smile" (we've all seen that before in our own lives ; ).

I know people toss words around like "un-presidential" rather loosely sometimes, but I saw my definition of it last night. I would not want a President displaying behaviour like that with his own caucus, with the opposition, and particularly with world leaders at some critical time. It made you wonder if he could handle an actual confrontation versus rather standard fair during a debate.

Were the stakes high for him? Of course. But how does that pressure compare to the "real world" of representing your nation on the international state? Not even close.

Lastly, I was totally put off by McCain's "woe is my lot in life" angst at having a reverend whom he has praised in the past scolding him on not reeling in his supporters. Yeah, that totally compares to the ever-growing clips of supporters yelling "Kill Him" or "Terrorist" about his opponent.

Poor McCain (my ass). Grow up, Man. You're several decades older than me and your opponent. Learn some perspective.

“McCain was completely incapable of sustaining any momentum, and clumsily returned again and again to his "Joe the Plumber" gimmick. It was clear that John had "jumped the shark" when he began talking directly to the unseen "Joe", and congratulating him for being "rich". I think he realized too that he had blown his "last best chance". His eyes started flittering back and forth like he was lost and scared, and he began to make the faces that have been the source of so much speculation regarding his temperament and stability.”

I don't know that John McCain is unhinged - yet - but I'm not sure that he could safely be trusted to hold up to the pressures of the presidency either.