I Oughta Be Rich, Insanely Rich 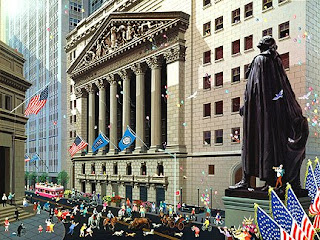 I oughta be rich right now, a multimillionaire at least, maybe even a billionaire. I oughta be basking in comfort and luxury, having to worry about whether I would spend next week at my beachfront villa on Maui or my suite in Rio. Hmmm, decisions, decisions.

If only someone had told me a few years back that, for just pennies on the dollar, I could buy a bet, at 20 to one odds no less, that the US housing bubble would burst. Imagine, a "bubble" bursting? Just like every bubble before it has burst? What are the chances?

So I buy the ultimate no-lose bet for just pennies on the dollar and reap an insane windfall when one morning I get up and discover that, golly gee, the housing bubble has burst.

But no one ever came to my door asking if I'd be interested in picking up a few Credit Default Swaps. I didn't receive any flyers offering to let me win big by betting that the American housing bubble would burst. Not even any telephone solicitations.

Hell, I'd never even heard of Credit Default Swaps until I saw Steve Croft explain how the damned things are at the heart of the American financial meltdown that's bringing recession to every industrialized nation on the planet.

Now these Credit Default Swaps are just a decriminalized form of grand larceny. In fact, until McCain cronie and sometime economic advisor Phil Gramm used his position as then Chairman of the senate banking committee to introduce and push through a law that literally pulled America's pants down around its knees and pushed it right over a barrel, these bogus insurance side bets were very much illegal. Why they were big time, felony illegal.

Maybe that's why we didn't hear of Credit Default Swaps until the meltdown. I figure they were just for "insiders." I mean they were too good to be real and, if the public had known that someone was fool enough to take bets against a bubble bursting, the demand for them would have been so great and widespread that the whole house of cards would have collapsed as fast as it went up.

No, there's no doubt about it. Credit Default Swaps, even though they had been decriminalized, still had to be treated as though they were criminal. They still had to be done under the table, very much on the Q.T. Lowlife like you and me would have killed this Golden Goose.

I visited a pretty credible site today that listed several categories of these CDSs that came to a grand total of - wait for it - just under SIX HUNDRED TRILLION DOLLARS. 60 Minutes only had them pegged at sixty trillion greenbacks but I'm now told that real estate assets were sometimes leveraged up to thirty times their value. Say what? Well that's how America's housing stock, which in 2006 was valued at just over $20-trillion all in, could be parlayed into $600-trillion of securitized side bets.

You see, you didn't have to actually hold the dodgy securitized mortgage to bet against it, to get a Credit Default Swap/Insurance contract. Anybody could bet on it, the more the merrier. That's how this monster grew. Thirty, fifty, hundreds of people who realized that the wiring was faulty could take out fire insurance on the same house. When it predictably burned to the ground, there were thirty, fifty, hundreds of policies to pay. Weird, ain't it?

It's much too late to get in on this scam. That came to an end with the subprime mortgage crisis/housing bubble crisis/Wall Street liquidity crisis-driven US meltdown turned global meltdown.

You see, you can't have larceny without thieves. And I suspect that the more we know about who got in on this gravy train and how, the more obvious it is going to be that this was a hell of a lot more than just greed-driven Wall Street adventurism. This reeks of culpability. It screams of an organized effort to fleece the financial sector worldwide.

Remember, these people are still standing in line, awaiting their windfall, wage-earner taxpayer-funded handouts. If the taxpayers are going to fund it, they should at least get a look at who's raking in the loot. That, I think, will put this villainy in a brand new light and I'm guessing that will make my proposition that these Credit Default Swaps simply be wiped off the books, declared null and void, seem pretty reasonable.

It's time to name names.
Posted by The Mound of Sound at 5:30 PM

If you have anything to say and can say something on topic without being vulgar and abusive, fine. If you want to be a gutter snipe, you're binned.