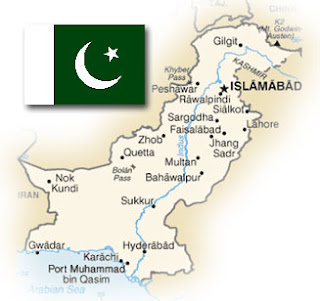 Pakistan continues to drift further away from the West and closer to China. When Pakistan plays such an integral role in the war which we're supposed to be fighting next door in Afghanistan, that's hardly welcome news.

The Pakistan news agency, Dawn, gives a pretty good indication of where this is going:

..Islamabad is looking forward to bolstering ties with Beijing in a big way.

The president’s decision to visit Beijing after every three months and agreements for the setting up of two nuclear energy plants, launch of a satellite and heavy investments by Chinese corporations in several other projects are some of the signs.

According to the foreign minister, the president would visit China every three months for “promoting economic integration between the two countries, enhancing their connectivity, optimally utilising the economic complementarities; and promoting trans-regional economic cooperation”.

“President Zardari wants to give a new dimension to China-Pakistan relations, basing them on enhanced economic cooperation,” the foreign minister said.

In the energy sector, Mr Qureshi also saw a role for China in the gas pipeline project between Iran and Pakistan. “I see a role for China whether China joins the projects at some later stage or invests in it.”

Another Pakistani news service, PakTribune, has this from Zardari:

The President pointed out that Pakistan has been following China’s progress and “we take pride in their success, because we are like a family.”

“Chinese and Pakistani people are like a family”, he said. “We see their progress with pride and are happy to see our friends strong. If China is strong, we are strong.”

There has been a groundswell of anti-Americanism building in Pakistan since before the ouster of Pervez Musharraf. The Zardari government seems to be riding that wave with real success. There are real economic, military and security questions that will come out of the closer bonds being forged between Islamabad and Beijing.
Posted by The Mound of Sound at 11:38 AM

It's a guarantee that the Chinese will not play Pakustan's religious game though. Don't run away with the idea that China is not in this for China either. Bigger and better control is what the Chinese are after and they don't care what country it is. Morris

If you will read the piece I wrote three days earlier "Arms Race Update- Brand New Cold War" you'll find an analysis of what China stands to gain geo-politically vis a vis both the United States and India by tucking Pakistan tightly under its wing. It's a theme I've been looking at since the US cut its nuclear deal with India and then openly snubbed Musharraf. I'm afraid that Washington has, once again, gotten ahead of itself and acted without regard to the blowback it was bound to receive.