Should We Be Sending Observers to the US Election? 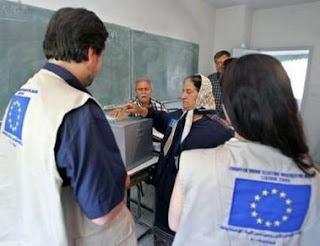 This one stinks. It reeks. CBC News reports that a New York County sent out advance ballots listing the Democratic candidate as Barack Osama.

Election officials moved quickly to pull the ballots once the "mistake" was spotted by a local newspaper.

Just a typo they claim. Yeah, sure. Not Onama or Okama or Olama, no Osama as in "bin Laden." Typo my ass.
Posted by The Mound of Sound at 8:26 AM

Email ThisBlogThis!Share to TwitterShare to FacebookShare to Pinterest
Labels: US election