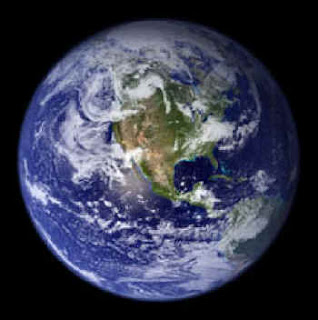 Another report today on the state of man's ecological deficit. What's that? It's the rate at which we're depleting our planet's renewable resources faster than they can be replenished. That doesn't sound possible, does it? Well it is.

If you've got a cow you rely upon for milk, you're not doing yourself any favours if you begin chewing the flesh off its bones. You're going to kill the cow, aren't you? Once it's dead and you've finished off the meat, you're not going to have meat or milk, are you?

A new report out today, the Living Planet study of just how well we're doing with earth's renewables. Full points if you guessed "not good." The report is the joint effort of the World Wildlife Fund (WWF) based in Geneva, the Zoological Society of London and the Global Footprint Network based in Oakland, Calif. From CBC News:

Demands on natural resources overreach what the Earth can sustain by almost a third, the report says, adding that people are drawing — and often overdrawing — on the agricultural land, forests, seas and resources of other countries to sustain them, it adds.

"If our demands on the planet continue to increase at the same rate, by the mid-2030s we would need the equivalent of two planets to maintain our lifestyles," said James Leape, international director general of the WWF.

Now here's a little something to chew on. It was only a few years ago that we figured we had until 2050 to reach the point of consuming two planets-worth of resources. That's just been moved up by about 15-years.

The report claims that three-quarters of mankind live in countries where consumption is outstripping environmental renewal. Let's see, that'd be just shy of five billion people. And it's not just the poor countries that make the list.

Even the United States is facing a looming freshwater crisis. Normally arid parts of the U.S. have been transformed into agricultural powerhouses thanks to acquifer irrigation - that is pumping groundwater to the surface. Think about places that used to be arid, prairie grassland like Kansas. The problem is they've been pumping ground water at rates up to ten times their acquifers' recharge rates. That means pumping out ten barrels of water for every barrel of rainwater that makes its way back in. Do the math, it's a suckers' bet. And yet they're still filling artificial lakes around Las Vegas casinos. Mind-boggling.

There's the great Colorado River that supplies water to much of the southwest. So important is the Colorado that decades ago the neighbours signed a treaty defining which state got how much. Something like 20% was supposed to be left for the Mexicans. Guess what? The Colorado no longer flows into Mexico and the US states are at each others' throats over what remains.

Madness? Of course it is. Sheer madness and it's a mental infirmity that's rapidly becoming the norm around the world.
Posted by The Mound of Sound at 10:33 AM