Whatever Happened to the "Shawinigan Handshake"? 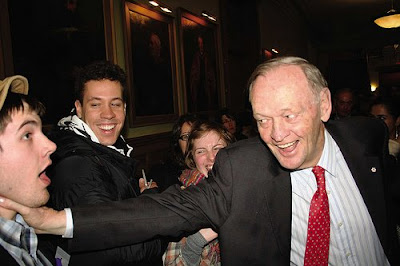 So, it's cost the taxpayer $30-million dollars to protect Stephen Harper since he took office in 2006. Sounds like a lot but without figures for previous prime ministers who can tell?

Still, what about the days, not that long ago, when you could count on a prime minister to handle at least some of his own security? Maybe Jean Chretien could give Steve a few lessons in the manly arts. Lord knows he could use them.
Posted by The Mound of Sound at 8:43 AM

First, he is a conservative who doesn't hate Israel and the USA.

Therefore, the muslims want him killed.

I would bet that 99% of his death threats are from muslims.

I find it funny that you complain about keeping your P.M safe, but have no problem with your Governor General spending 800grand to travel including over 70 grand for private family time.

What do you think about Michelle Jean wasting your money?

Ah racism is alive and well.

Excuse me, Anon, but I didn't "complain" about Harper's security costs. Try reading what's written, slow down if you must, but try to respond to what's actually on the page, not what's rattling around inside your skull.