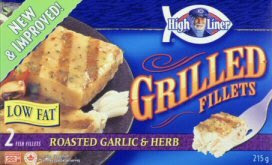 Sarah Palin says she doesn't believe in man-made global warming. She also opposed placing the polar bear and beluga on America's endangered species list lest it trouble those oil companies she's always standing up to.

Now her state is facing another climate change victim - its main fish stock (no that's not king crab), the humble pollock, is taking off for Russia.

It's something we've seen plenty of out here on the coast. As the polar ice fields retreat, waters warm and species move north. There has been a steady northward retreat of the food chain. Grey whales which once used to gorge in the Bering now travel on into the Beaufort to find krill and, in the process, they're losing a lot of body mass.

But this is about Alaska and the pollock. You won't see pollock on the menus in fancy restaurants but it's a big seller packaged as fish sticks or fast food fish sandwiches or processed up as artificial crab. Alaskan fishermen have been harvesting about two billion pounds of pollock annually.

Fish stocks that were once abundant near the Aleutians are now reaching the Russian border, steadily moving the northwestern end of their range.

When migratory fish stocks dwindle on this coast, suspicion always turns to the neighbours. It's an historic squabble between BC and Washington salmon fishermen. Now it seems that same sort of dispute is inevitable between Alaskan and Russian authorities. When what's at stake is the largest human-food fishery in the world the rivalry could be intense.
Posted by The Mound of Sound at 7:21 AM

Palin may not believe in man made global environmental problems but she sure believes in the fantasy of "God". God will take care of all....what a copout. Morris