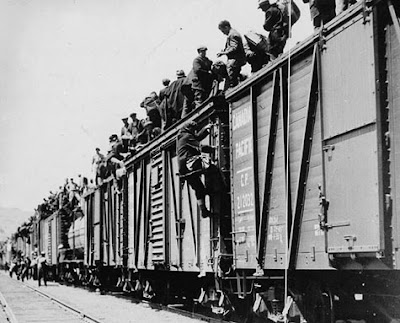 The Canadian Centre for Policy Alternatives has released a poll showing that 39% of Canadians believe they're but one or two paycheques away from poverty.

Pollster Environics surveyed 2,023 Canadians for the left-of-centre think tank. It found that Canadians are almost unanimous in their call for governments to protect their jobs.

"A shocking 96 per cent are saying 'Do something about investing in jobs and skills (and) training right now. Don't wait until there are better balanced budgets,'" CCPA senior economist Armine Yalnizyan told CTV's Canada AM on Monday.

The CCPA poll found that:

"The interesting thing about the poll is that Canadians looked beyond their own pocketbook issues and said ... that governments need to step up to the plate, too," Yalnizyan said.

She said Canadians look at Scandinavian and European countries' focus on poverty reduction and say, "Why can't we do that here?"

According to the survey:

Well, if our Furious Leader, Stevo, is looking for a mandate, there's one for him. 96% is one helluva mandate, Steve.

Curious that so many Canadians are looking to those awful "Northern European welfare states" isn't it Steve?
http://www.ctv.ca/servlet/ArticleNews/story/CTVNews/20081027/jobs_poverty_081027/20081027?hub=TopStories
Posted by The Mound of Sound at 1:20 PM

Email ThisBlogThis!Share to TwitterShare to FacebookShare to Pinterest
Labels: Harper, US meltdown

I've been aware of this situation in Canada for a long time and it just disgusts me. I don't have any debt at all but know that I am one step from being on the street when I get back there and all due to having gone through a divorce that left me penniless....yes it happens to women. In a country like Canada this should not be happening. In France heart attack is much less than in Canada and the French drink, smoke and eat fatty foods all the time. Why the difference between the French and Canadians? The French have job security. Then there is the country of Norway....we should be so lucky to have their system. What makes me so flippen angry about what is happening in Canada is this: It just isn't the Harper Government but the Liberal Governments that have gone before that have contributed to this Canadian phenomena. This has been in the making since the late seventies. Harper has a golden opportunity at present to do something about this....will he? Not on your dinky! Not while big American business is telling him what to do. A. Morris