Time for a New New Deal? 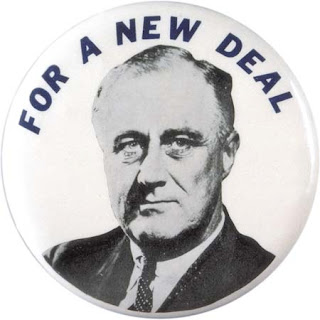 Nobel prize winner, economist and columnist Paul Krugman warns that the only thing that can help the United States now is a new New Deal but on a grander scale, perhaps, than the programme of FDR in the 30's.
Krugman notes that the economic collapse has now spread beyond the financial sector and has metastasized throughout the general economy. This, he maintains, makes it essential to move past bank bailouts and start directing aid to state governments and those segments of the public that will be hardest hit.
"Just this week, we learned that retail sales have fallen off a cliff, and so has industrial production. Unemployment claims are at steep-recession levels, and the Philadelphia Fed’s manufacturing index is falling at the fastest pace in almost 20 years. All signs point to an economic slump that will be nasty, brutish — and long.
How nasty? The unemployment rate is already above 6 percent (and broader measures of underemployment are in double digits). It’s now virtually certain that the unemployment rate will go above 7 percent, and quite possibly above 8 percent, making this the worst recession in a quarter-century.
And how long? It could be very long indeed.
Even if the ongoing efforts to rescue the banking system and unfreeze the credit markets work — and while it’s early days yet, the initial results have been disappointing — it’s hard to see housing making a comeback any time soon. And if there’s another bubble waiting to happen, it’s not obvious. So the Fed will find it even harder to get traction this time.
...In other words, there’s not much Ben Bernanke can do for the economy. He can and should cut interest rates even more — but nobody expects this to do more than provide a slight economic boost.
On the other hand, there’s a lot the federal government can do for the economy. It can provide extended benefits to the unemployed, which will both help distressed families cope and put money in the hands of people likely to spend it. It can provide emergency aid to state and local governments, so that they aren’t forced into steep spending cuts that both degrade public services and destroy jobs. It can buy up mortgages (but not at face value, as John McCain has proposed) and restructure the terms to help families stay in their homes.
And this is also a good time to engage in some serious infrastructure spending, which the country badly needs in any case. The usual argument against public works as economic stimulus is that they take too long: by the time you get around to repairing that bridge and upgrading that rail line, the slump is over and the stimulus isn’t needed. Well, that argument has no force now, since the chances that this slump will be over anytime soon are virtually nil. So let’s get those projects rolling."
The rightwingnuts will flap their wings and squawk "socialism" but that won't change the problem and it certainly won't make it one bit better either. It's a lesson that will soon become needed on our side of the border also. Harper needs to realize that, much as it runs against the grain of his doctrinaire ideology, Canada's most vulnerable, not just our record profit setting banks, will need help from the feds to get through this downturn just as we've always been there to help them in the past.
In a recession/borderline depression crisis, it's not deficits that bother me but the purposes they're put to - who actually gets help - that's what matters. Canada's infrastructure could also use a little help - from dilapidated bridges in Ontario and Quebec to the patchwork 401 Trans Canada highway to the crumbling water and sewer systems in Vancouver.
It's a lot tougher to govern a country in the really bad times. So far Harper and his team have had a pretty easy ride. We may be about to learn what they truly think of the average Canadian. If Steve doesn't prove up to the challenge I suspect the Canadian public might be very glad indeed that we've got a minority government.
Posted by The Mound of Sound at 3:37 PM

The closest platform to a new deal approach was the NDP platform that wanted to tackle consumer price gouging, that wanted a freeze on corporate tax cuts and use that money on targetted tax cuts for companies that created green jobs. An infrastructure program that wasn't 'misleading' (to quote John McCallum when he was discussing the Liberal costings). As someone who comes from a very Liberal family (close relative was an lib MP for almost 20years) I honestly think that it is the NDP that took up the progressive and practical mantle and that there is really no ideological centre for the Liberals. The internal split between right and centre left is a chasm in the LPC that will always produce leadership fights and after leadership conventions continuous leadership rumblings just below the surface.