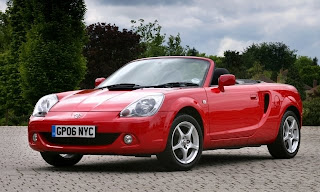 A new twist on the old Nigerian online scam. Instead of millions of dollars being held by a former African official willing to hand you a big chunk, this time it's a Toyota windfall. You might just want to get to know me better now that I'm the Grand Prize Winner of One Million Pounds Sterling as evidenced by the excerpt from the e-mail below:

This is to inform you that have been selected Toyota for a Cash prize of1,000.000.00 (One Million Pounds) and a brandnew Toyota car in The International programs held 2008 in LondonUK.

Is it just me or is there something fishy about this? Maybe it's the spelling, possibly the grammar. But, gee, won't I look great in that brand new Toyota with a trunk stuffed with English Pounds?
Posted by The Mound of Sound at 9:44 AM