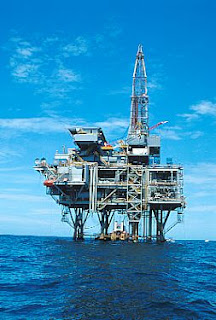 Here's something we've never had to visualize since Fidel Castro sent Battista packing - a Cuba flush with money. A lot of money. Money on a scale that's never been imagined by Cubans or by those who've kept the embargo thumbscrews on the place these past, oh, 50-years.

According to a report in The Guardian, Cuba may have considerable, untapped oil reserves, enough to place it in the top 20-oil producing nations within a matter of years.

"Mother nature, it emerged this week, appears to have blessed the island with enough oil reserves to vault it into the ranks of energy powers. The government announced there may be more than 20bn barrels of recoverable oil in offshore fields in Cuba's share of the Gulf of Mexico, more than twice the previous estimate.
If confirmed, it puts Cuba's reserves on par with those of the US and into the world's top 20. Drilling is expected to start next year by Cuba's state oil company Cubapetroleo, or Cupet.

"It would change their whole equation. The government would have more money and no longer be dependent on foreign oil," said Kirby Jones, founder of the Washington-based US-Cuba Trade Association. "It could join the club of oil exporting nations."

This probably couldn't have come at a worse time - for Washington - now that Beijing has proven just how wonderfully communism and capitalism can get along.

I am no apologist for the excesses and wrongs committed during the Fidel years although, in fairness, he probably killed a lot fewer people in Central America than some US presidents did. I'd just like to see the Cuban people catch a break for once. That is long overdue.
Posted by The Mound of Sound at 7:38 AM

Email ThisBlogThis!Share to TwitterShare to FacebookShare to Pinterest
Labels: Cuba

For the USA I think it would be called Karma.

It’s great news that Cuba might finally have found a solution to its energy problem. Let’s hope they can find a way to bring the oil out. They’re already meeting nearly half of their domestic needs through domestic production.

My father and his parents lived in Cuba from 1939 to 1942. They were German Jewish refugees from Nazi Germany, and they were not political left-wingers. That family history is where my own interest in Cuba comes from.

Cuban society today represents an effort to build an alternative to the way life was under the dictatorship of Fulgencio Batista, who ran Cuba before Fidel Castro led a revolution there. No one complained about a lack of human rights and democracy in those days, but U.S. businesses were protected.

Some things work, some don’t. Like any society, Cuba its flaws and contradictions, as well as having some solid achievements. No society is perfect. But we can certainly learn a few things from Cuba’s experience.

Cuba is the only country on earth for which people from the United States need a permission slip from the federal government to go for a visit. You folks in the UK are lucky to live in a country with normal relations with Cuba.

Imagine an oil rich country that distributes its oil wealth to the people rather than a corporate elite.

RWW, don't get carried away with yourself. By the way Rich, I really enjoyed your take on SD as a man better suited to running a country than to getting elected to run a country. Very apt, sadly.