McCain Goes All In - Even His Integrity Is On The Line 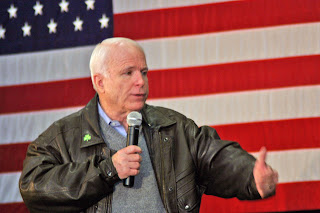 John McCain will do anything, say anything to defeat Barack Obama and win the White House and he's willing to sacrifice everything, including what remains of his dignity and integrity.

It's sad really to see a guy who's built this legendary image based on an ordeal in a North Vietnamese POW camp four decades ago show just how little that truly matters - to himself. Here's a hint - if it doesn't matter to John McCain, it shouldn't matter to anyone else either.

And it doesn't matter to John McCain. Heroes don't dive into the gutter. I've had the privilege of meeting and knowing a few real heroes. They're all dead now. One was a true "Knight of the Air," two others were ground pounders. They all had one thing in common. They didn't try to wear their heroism on their sleeve - they were extremely private - and they always stood tall.

John McCain has traded on his heroism. He's exhausted it, reminding all who'll listen of it with an implied suggestion that someone owes him the presidency because of an event largely beyond his control forty years ago.

Heroism doesn't wear well for very long when it's flown like a flag in public. Maybe that's something real heroes instinctively understand. There's something disingenuous in tossing it up in the air for people to watch again and again.

But when you couple the political marketing of heroism with slimeball, gutter politics, the aura combusts like white phosphorous exposed to oxygen. All you're left with is ashy residue. And I guess that's an apt metaphor for John McCain, 2008.

This campaign will cost John McCain more than his last shot at the US presidency. He will have also forfeited his dignity and his integrity. He won't be the first hero to turn bum and he won't be the last. At least he won't have to spend time in the Crowbar Hotel like his fellow Vietnam hero and Republican compatriot, the former senator Randy "Duke" Cunningham.
Posted by The Mound of Sound at 5:50 PM

People who are still pulling for McCain, against all logic and self-interest, remind me of some other people I know when it comes to food. They will choose the same old menu item, even if they know the eggs aren't fresh and the bread is so stale it's starting to get moldy -- even if they know it could actually hurt them -- rather than try something fresh, nutritious and expertly prepared, just because it's unfamiliar or has a funny name.