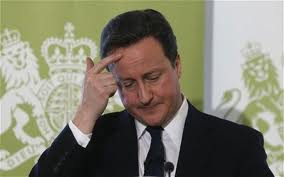 David Cameron wanted to bomb Syria so badly his teeth hurt.  There was just one problem, Britain's Iraq War fiasco.

Because of Iraq, David Cameron had promised to allow parliament a veto on going to war back in 2010. He had even committed himself to repealing the royal prerogative, the executive powers which enable him to bypass parliament, though he hasn't, yet.

As a result, parliament had the power to deny him authority, even in a relatively modest and constrained form, to strike against Assad. The jury's out on when that last happened: some say 1782 and the American war of independence.

David Cameron imagined he was driving a wooden spike through the heart of Tony Blair's legacy.  Little did he realize the spike was iron and was going straight through his own foot.

Perhaps Canada should, likewise, review the state of executive powers in our Parliament.  If we're going to stick with "first past the post" elections, we risk winding up with some near unlimited powers being wielded by people most of us don't like.  There's nothing democratic in that.

Update:  I'm reposting this because of a number of bizarre computer problems I've been having over the past few days/weeks/months.  I've been hacked more than once.   Some guy named Rios from Detroit, Mo. managed to take down both of my domains: disaffectedlib.com and thedisaffectedlib.com by persuading GoDaddy that I had transferred them to him.  GoDaddy, by the way, are a bag of tools when it comes to this sort of thing.  That Rios has done nothing with the domains strongly suggests his intent was simply to take them down.  Yesterday my Norton security software was compromised.  The password manager and identity vault were taken down.  Norton techs tried for much of yesterday afternoon to get them back, even deleting and reloading their company's software but they were defeated and finally quit.

Today I posted this item and later thought to go back and edit something.   The post was up on Progressive Bloggers and Canadian Progressive Voices but had vanished from Blogger itself and my blog directory.

Curiously enough, a comment Anyong made to this post, has now appeared on another item, a draft that has yet to be posted.

Was wondering what happened.

Excellent point made regardless.

The spooks even tormented Tommy Douglas.

Unsolicited advice: For better computer security switch to a GNU/Linux or BSD platform.

Links to some decent GNU/Linux operating systems can be found here:

If you do decide to test drive GNU/Linux. I would recommend starting with 'Linux Mint'. This is probably one of the easiest pathways to migrate to the Linux world.

Anyong said...
Life is becoming worthless for those of us who are not multi millionairs, billionaires or top notch millitary personnel. What does that say about our value system and how extreme with irrational fear and distrust of others has become. Room for exhibiting undue suspicion doesn't show much thought nor respect for the word "dialogue".