Coastal Flooding - A Trillion Dollar a Year Problem by 2050 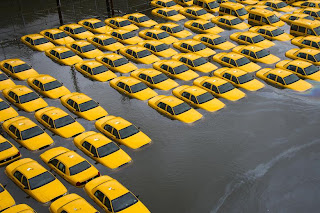 People who inhabit coastal areas don't waste much breath muttering about hoaxes or myths of climate change.   They leave that nonsense to petro-heads and other drylanders.

A new report warns that coastal cities could suffer flood damages of a trillion dollars a year by 2050.   And the news is particularly bad for the United States.

More than 40% of these prodigious costs could fall upon just four cities – New Orleans, Miami and New York in the US and Guangzhou in China.

Stephane Hallegatte of the World Bank in Washington and colleagues looked at the risks of future flood losses in the 136 largest of the world's coastal cities.

Any coastal city is always at some risk – by definition it is at sea level, and often on an estuary or floodplain, and very often began as a seaport.

But risks increase as the environment changes: some coastal cities are subsiding; sea levels are slowly but surely rising as the oceans warm and the glaciers melt; and for two decades researchers have repeatedly warned that what used to be "extreme" events such as once-in-a-century floods are likely to arrive considerably more often than once a century.

In 2005, average global flood losses are estimated to have reached $6 billion a year. This figure is expected to grow to $50 billion a year, and unless cities put money into better flood defences, losses could pass the $1 trillion mark.

To make their calculations, the authors matched average annual losses (and in a city like New Orleans, much of it already below sea level, this is estimated at $600 million) against a city's gross domestic product, to provide a measure of how much should be set aside to pay for such losses.

It's important to realize that these flood losses will be just one of any number of climate-change related impacts that countries like the U.S. will have to bear.  Droughts and inland flooding will also take a major toll as will severe storm events of increasing intensity and frequency.


This report presents a snapshot of what to expect by 2050, not in 2050.  The conditions being addressed are already building, they're already underway.  We're going from a few billion a year a decade ago, to tens of billions a year, to potentially a thousand billion a year by 2050.  That's close to one percent of global GDP for just one problem - flood damage to coastal cities. 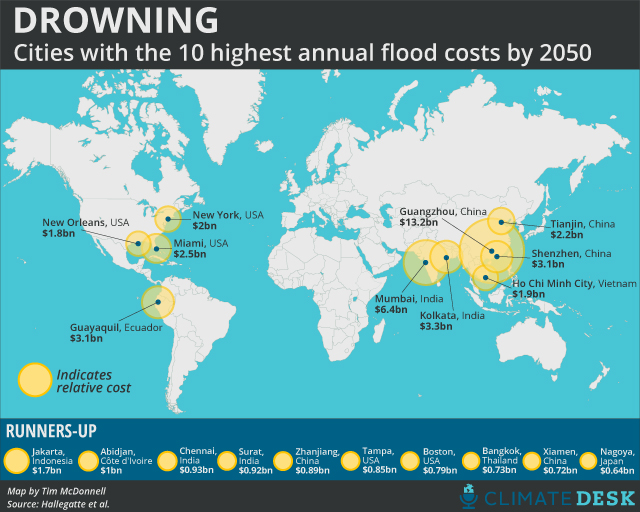 Well, well, well! Stephen Harper to seek prorogation of parliament until October..that says it all.
They won't be preparing for their policy on the environment that's for sure.

When considered in the context of average, annual costs you have to question how some of these cities will be able to cope with the cumulative costs over years or decades.

I would expect that many of these cities will retreat from the sea, relocating steadily inland. Some, such as New Orleans may not have that option.