Could the F-35 Be the Biggest Blunder in Canadian Military History?

A timely warning about "locking in" to novel technologies such as the over budget, overdue and under-performing F-35 from Brookings Institution senior fellow Peter Singer.  His advice - learn from the mistakes of the past, just don't repeat them. 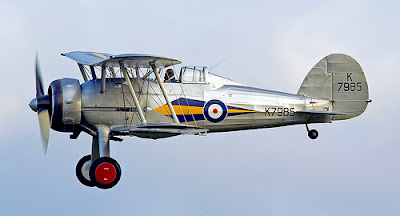 In 1934, the British Air Ministry poured money into a new aircraft meant to advance past the World War I generation of planes. The metal-clad Gloster Gladiator could fly almost 250 miles per hour and carry four machine guns. Unfortunately, this biplane was quickly outmatched by new monoplanes such as the Spitfire and the German BF-109. And yet the British plowed ahead, falling prey to the fallacy of sunk costs and ultimately building more than 700 Gladiators. The pilots unlucky enough to fly the last, best biplane gave it a different nickname: the “Flying Coffin.”

Militaries may not like it, but they must be prepared for cherished developmental programs to go rapidly out of date. Rather than holding on, they must be prepared to treat them as sunk costs: spent money to be lamented but not weighed in setting future requirements. And yet the real challenge isn’t merely to ignore lost bets, as a good investor should, but also to travel the larger transition. Success depends not on merely taking risks but spreading risks. Another way of putting it is that while there is danger in putting all your bets on the best of the last generation, there is also danger in embracing too closely the first generation of the new.

If the position of the U.S. and its allies today is comparable to that of the British almost a century back, the case of the HMS Furious is instructive. Despite the battleship’s dominance of naval warfare, in 1917 the Royal Navy pioneered a capability called an “aircraft carrier,” a ship that took the new technology of an airplane out to sea. Yet having launched a disruption, the British proved unable to move past early suboptimal designs and concepts of use. It was the U.S. and Japanese who would figure out the fleet carrier. When you gain the new, you still have to ask whether you are locking in on the first generation of its design, doctrine, tactics, etc.

As I have argued repeatedly on this site, the F-35 is really a Beta-model warplane.   Because it's a novelty airplane, it's still in development.  That's what the aircraft's "testing" regime actually is, a multi-year development programme to identify essential modifications that will then be retrofitted to aircraft already constructed and in service.

Lockheed's publicity people branded the F-35 a Fifth Generation fighter but, even if that's so, it's very much Generation 5.0 and we'll be locking in to that first stealth iteration for, we're told, upwards of 50-years.   That's beyond foolish.

Canada really cannot afford to get locked in to unproven technology that's this costly.   We have to avoid the trap the Brits fell into with the Gloster Gladiator.  Unless you're prepared to go to war very soon, you can't judge the F-35 by the technology its potential adversaries are fielding today.   What matters is how they'll respond to it a decade from now or two.

The F-35 might have looked invincible a decade ago but since then its weaknesses and vulnerabilities have been revealed.  We know them, the other guys also know them and they're working on ways to exploit them.   The Chinese, it's said, helped themselves to a vast amount of Lockheed's stealth bomber data by hacking into contractors' computers.

Imagine what Herman Goering must have thought as he watched the Brits continue to pour money into the Gladiator while he was equipping the Luftwaffe with Messerschmidt 109s.   Now imagine what Chinese generals must be thinking as they watch America and her allies herded into the F-35 corral.  Pretty much the same thing, I'll bet.

We may not know the secrets of the F-35 but the Chinese know a good many of them.   They know what the F-35 can do and what it can't do and they probably have an idea or two how to counter what it can do.

Once we're locked in to Lockheed's light stealth bomber, we might find ourselves stuck for thirty, forty, even fifty years, with the 21st century equivalent of the last, best biplane.
Posted by The Mound of Sound at 4:16 PM

The Ross Rifle was, I think, the biggest Canadian military blunder to date. However, if the government pulls the trigger on the F-35 deal then it will easily take the number one spot.

Ah, yes, the Ross rifle. Good pick. Like it or not, the F-35 is a prototype, a technology demonstrator. Until its vaunted stealth advantage is tested in the sort of peer-on-peer warfare for which it's intended we have no way of knowing how well it may stand up.

What we can tell is this. We can assess the F-35 on its other merits, discounting its untested stealth qualities. We can measure it on speed, cruise speed, turn and climb rates, range, payload and survivability (how much damage it can absorb). The current assessments are unimpressive.

The F-35, stacked up against its contemporaries has, in varying degrees, a speed problem, a range problem, a weight problem, and an agility problem. We're told the 35 can overcome some of these by loading ordinance and fuel tanks outboard. That, of course, not only kills the stealth advantage but it worsens the weight, speed and agility problems.

The Americans are already planning the F-35s successor which some generals tout as a "6th Generation" warplane. In reality it'll be more a Gen 5.2 or 5.3 airplane, building on the 35 and engineering out the bugs.

The F-35 project must have sounded good on paper a decade ago, but, let's face it, the project has failed.

Canada should be looking at replacing the aging Hornets with replacements such as the Super Hornets. That will allow us to modernize our fleet in the short term while examining longer term replacements.

I think that the DoD should be looking at the shorter term before they bet large on the longer term.

What you're suggesting is pretty much what the Australians have done. While still notionally committed to the F-35, they've added 3-dozen F-18s to their fleet to tide them over. It's a prudent strategy that shows Australia thinking militarily while Canada treats the F-35 as a political issue.

I'm guessing that the problem now is that 'the Jesus' recently descended from heaven and now sits on the Lochheed Martin bored of directors ;)

I think Lockheed Martin has been somewhat unfairly treated. It wasn't Lockheed that chose this build - then test - then upgrade project scheme. This fraught with peril acquisition model was prescribed by the Pentagon and their political masters in the White House. Bush-Cheney were instrumental in this fiasco.

Lockheed went into the F-35 project with the F-22 programme already underway. The company did not anticipate that Obama would kill F-22 production less than a third of they way through. That put Lockheed in a jam and entirely changed the economic dynamics of the F-35. This is America's largest defence contractor after all yet it's unclear whether it could withstand two body blows.

Lockheed was dealt a rotten hand and has had to play the cards they were dealt. You might not like the way they've played those cards. I don't.

Lockheed could have walked away from the project, but they agreed to deliver. And they have earned billions in profits as a result.

I do not feel at all sorry for Lockheed. I feel sorry for the taxpayers who have unknowingly allowed their governments to invest their money in this scheme.

You really believe Lockheed "could have walked away" from the F-35 project? Your naivete is breathtaking.

"You really believe Lockheed "could have walked away" from the F-35 project?"

Of course. Boeing walked away, as did Northrop-Grumman amongst others. Lockheed was the only sucker that took the bait. Sure, they got lots of taxpayer cash, but they are going to pay a horrendous price for their incompetence.

I really hate to burst your fantasy bubble but Boeing didn't actually walk away. Its X-32 design - designed, constructed and flight-tested - lost out to Lockheed's X-35 entry in October, 2001. Northrop-Grumman didn't enter a prototype in the competition but was involved as a subcontractor.

Well, Boeing did walk away from the project since they lost the bid. Look, Irwin, I really don't want to argue about this.

Bottom line, the F-35 project is a mess and Canada should not touch it with a ten foot pole.