Four Pictures Worth Many Thousand Words

A Vancouver group is targeting the public conscience with an ad campaign to show what has happened to the Palestinian homeland. 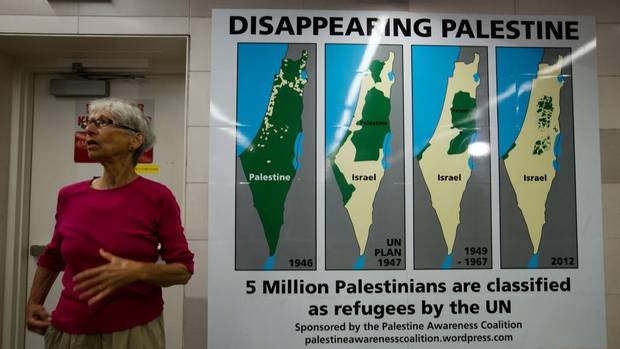 Unless you're a Zionist, it's a pretty disturbing but accurate depiction of how the Palestinians are being erased from their homeland.  The point is, it's not over yet.  The aquifer beneath Gaza has been "inadvertently" drained and the U.N. believes that enclave could be unlivable by 2020.  Presumably those Palestinians would have to be relocated to the fractured ghettos inland to the north.

The ads are running on Vancouver's transit system and they're expected to appear on Calgary and Toronto transit vehicles this Fall.  Jewish groups have denounced the images as "derogatory."  Turning logic straight on its head they claim this is a campaign to "wipe Israel off the map."

Stephen Schachter, the co-chair for the Centre for Israel and Jewish Affairs, argued that if advertisements targeted non-Jewish groups, the situation would be taken more seriously.

“I can think of all sorts of other kinds of advertising by other communities, whether it’s sexist, homophobic, anti-immigrant, anti-other-ethnic or religious groups that would be” prohibited, he said.

Yeah, right Steve.  It says a great deal that none of those criticizing these ads take exception to their accuracy.   They can't, they're very accurate.   And they can't take exception to the text.  There is none.  They just don't want people to see the plain truth that these maps so clearly depict.

It's interesting how they can make this be "anti" anything. It's a simple depiction of brute fact, with no assignment of blame or indeed agency.

It would seem that
a) The truth is anti-Israel, which of course makes the truth in turn anti-semitic
b) More specifically, admitting that Palestinians exist in any form is fast becoming anti-semitic

Hey listen Zionist jews you are not allowed to say anything against even if it is true because then it becomes a "hate crime."

The graphics do tell a brutal tale and the organizers wisely decided to omit any text that could be considered remotely objectionable. That didn't stop the criticism, of course, but it did expose it as utterly disingenuous.