How Beijing Became Conservatives' Home Away From Home 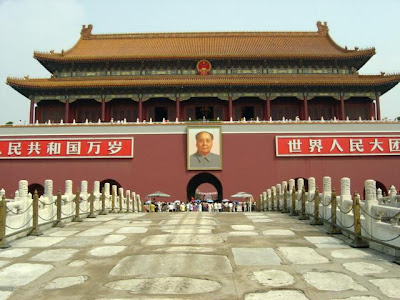 Alberta premier Alison Redford is leading a delegation to China next month to "drum up business."

Comrade Redford will undoubtedly be warmly embraced by her kindred spirits in the Politburo just as eager to give her the business she's there to up drum.

Was a time when Conservatives would react reflexively at the mention of the Peoples Republic of...   denouncing it as totalitarian, brutal, despotic, evil.  I guess that was before those came to be seen as great qualities in a business partner.

Reford and Harper love China and not just because the bosses there want to buy lots of bitumen.   They love China because the Commies want to buy bitumen with no questions asked.  There won't be any Chinese protesting bitumen imports - at least not for long.   Contrast that with the hassles Alberta has faced over the Keystone XL pipeline.  In China, Enbridge could run a pipeline like Keystone straight down the Great Wall, end to end.

Conservatives love the ChiComs because they have their people firmly under their jackboots.   The Tories must dream about how great that would be, if only...

The Tories were all for emulating the Americans when they were Top Dog.  Now the Americans are starting to slide and it's the Chinese on the way up.  So, what's not to like?
Posted by The Mound of Sound at 11:57 AM

Today Kevin O'Leary was on his show telling everyone how great it is to work with the Chinese. He said they are the greatest capitalists around.

I have had O'Leary's type in mind lately in thinking about how our grandkids will live with the burdens - economic, social, environmental - we are bequeathing them. I can't see how they're going to remain free without some sort of confiscatory wealth redistribution to restore both political and economic balance.

Let's be fair. It's not really that China is the new top nation so the Cons are bowing to them. Harper's gang have cozied up to far more violent regimes running far smaller countries for far smaller profits. Look at Colombia and its systematic assassination of anyone remotely dissenting--clearly a case for free trade!

Yeah but Colombia will never be the next best market for Athabasca tar.