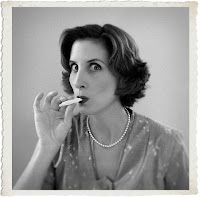 Time will tell but it was probably a bone-headed thing to do.  Why did Justin Trudeau volunteer that he had smoked pot recently?  Did he think it would make him look cool?   Was he hoping to attract the youth vote?

I don't think it's going to work.  A good many of us won't be bothered that he apparently smoked a bit of pot as much as we will be put off by him seeming to boast about it, to place himself in a spotlight of controversy.

"I not only own the company, I'm a customer."  Okay for the Hair Club for Men, not so good when you're vying to become prime minister.

This certainly wasn't the biggest gaffe in Canadian political history, not even close.  It was, however, a display of risky judgment by a young guy who needs to build public confidence in him.
Posted by The Mound of Sound at 8:54 AM

Mound, you're quite right. I think it was a little amateurish. He invited trouble. Earlier he disclosed that he took money for some speaking engagements after becoming M.P. That did not help him either.

Ex BC Liberal Premier Gordon Campbell is one of Harper's favorite henchmen. He was so drunk he even drove, on the wrong side of the road. Harper rewarded Campbell the post of High Commissioner to the U.K.. Campbell did a lot of dirty work for Harper.

Boessenkool, another henchmen of Harper's, did some serious misconduct to a female staffer, while very drunk. He resigned.

Pot is used for many medicinal purposes. Of the three of, alcohol, tobacco and pot? Pot is by far the least harmful.

Too bad people can't see the brain scan of an alcoholic. Or perhaps, the lungs of a smoker dying of lung cancer.

This stupidity is so silly, I can't imagine how people can be so stupid.

Anon, this isn't about the merits of pot versus tobacco or alcohol, nor has it anything to do with Campbell and his minions. This is about rash political judgment for a party leader whose youth could as easily become a liability as an advantage.

JT's numbers aren't bad but it's a long way to the next election. He'll have to hold his supporters and add more if he's to win and he can't afford to alienate his soft supporters.


....I think the admission that he doesn't drink coffee, nor alcohol, will lose him a lot more votes---that's the real gaffe here

Maybe Trudeau wanted to get it out in the open before the C's went into a tirade of negative nonsense. If that was his reason, it's not stupid at all.

I'm not entirely sure, Mound, that it was a gaffe. Some are interpreting it, according to message boards, as a refreshing honesty that is so rare in politicians today. However, unless Trudeau starts to formulate and articulate solid policy that exemplifies vision and not just expediency (pot is hardly the burning issue of the day, in my mind), my doubts about his leadership capabilities will remain.

I don't know about "refreshing honesty" Lorne in a guy whose challenge seems to be in establishing gravitas.

As Anon10:31 speculates JT might have learned he was going to be outed.

As I said, I could be wrong, but I see more to lose than win in this.

I think it's an incredibly shrewd tactical decision.

Although most Canadians wouldn't see a problem with someone smoking pot, there IS still a taboo about admitting to it in public, especially for public figures. Him taking the initiative, as a potential leader, and admitting to it on his own initiative breaks the taboo, and generates discussion. The other parties need to respond to it, but they can't because they aren't on board majority opinion.

The honesty is also refreshing. Compare with Rob Ford-- his ardent supporters make excuses like 'I dont care what he smokes, so long as he gets the job done'. Implicit in this however is the secrecy that Ford smoking crack entails, which doesn't sit well with people.

There are other reasons I see it as tactically sound/clever, but I'll stop here.

I agree with LeDaro. He's invited trouble. there are some nasty little shiites in the PMO/CPC these days and I'm sure it won't be long before one of them gets the idea to plant a wee bit. The RCMP would of course be notified. well, you can guess the rest.

I think it was a mistake, although, the possibility that he was outing himself before the cons could do it hadn't occurred to me. I think our pot laws are stupid, and I am in favour of changing them. However, there are still laws. I think trumpeting around that he has broken the law is not all that smart.
If Trudeau gets a pass because we think the pot laws are stupid, then shouldn't Ford get a pass for distracted driving if he thinks he can read and drive at the same time? What about breaking election expense laws if Del Mastro thought those laws were stupid?

Is there no room in this world for an honest politician?

"Masterstroke." Yeah, that's the sort of reasoning that took the Liberals from Sussex Drive to Stornoway to Motel 6 out on the Gloucester Highway.

I think this was pretty good. Good policy, with a small but significant constituency. The Liberals are now strongly differentiated from both the Dippers and CPC. This will move votes everywhere, but in BC especially where there are a lot of potential seats to win. Probably will grow turnout a bit too. I am sure it was tactical though, with Trudeau and his communications folks asking themselves, -How can we keep Harper off the news with his dumb arctic shenanigans.-. Instead of sending in a brief answer to the huffpost query, he gave them 20 minute interview, and punted Harper off the front page. Sweeeet.