Remember the Line About Horses and Barn Doors? Hey, Merv, Why The Rush? 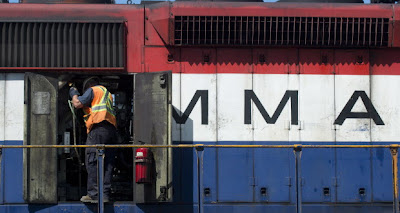 "It would not be prudent, given the risks associated with rail operations, to permit MMA and MMAC to continue to operate without adequate insurance coverage."

The company has said it has less than $25-million in coverage.  The clean-up costs alone for the Lac Megantic catastrophe are expected to exceed $200-million.

It's time we had a rubber-glove examination of our Canadian Transportation Agency which seems to be the same outfit that fairly recently granted MM&A dispensation requiring just one engineer instead of two on its locomotives.   Somebody there must have figured that $25-million was adequate third-party coverage well before the Lac Megantic disaster.   What other brilliant decisions has CTA made?

And, while we're on the subject of dodgy trains hauling Athabasca bitumen, congratulations to retiring Conservative MP, Manitoban Merv Tweed, who is resigning at the end of the month.   The former chairman of the Commons transport committee, wraps up an 18-year stretch in provincial and federal politics to become the new president of Omnitrax Canada, a rail company that's planning to ship western crude through northern Canada to tankers at Churchill, Manitoba.

Omnitrax CEO Kevin Shuba praised Tweed, saying he "brings a wealth of knowledge" to the rail company.  I'll bet he does, Kev, I'll bet he does.   Kind of makes you question whether Tweed will be leaving the Tories for Omnitrax or whether he'll just be Harper's man inside the oil railway?

I also wonder if Marvelous Merv or his transport committee had anything to do with procuring MM&A its exemption from the two-engineer rule?   Maybe he should stick around Ottawa for a while to answer a few questions.
Posted by The Mound of Sound at 3:03 PM

"wonder if Marvelous Merv had anything to do with procuring MM&A the exemption from the two-engineer rule? Maybe he should stick around to answer a few questions."

Sadly, that is the question Mound. Did Merv have anything to do with decision that allowed MM&A to operate with a single engineer? Will he ever admit to that? Will he collect a healthy public pension and sleep soundly while he knows he played a part in the deaths of fifty innocent people due to his incompetence?

Alas, he will be cashing his pension cheques and sleeping soundly regardless of anything.

In fairness, Tweed was not the transport minister but that doesn't mean he played no role in pushing for railroad deregulation of the sort that might have contributed to the Lac Megantic catastrophe. The fact that, just weeks later, he's announced his resignation and is off to become president of a railway company looking to haul bitumen to Churchill should raise eyebrows. He certainly doesn't bring any experience to his new job. He's been a professional pol for the past 18-years. It strikes me that Tweed will be Ottawa liaison for the railway or the government's man in the railway. When you're a petro-state, lines between the government and energy producers become hopelessly (and conveniently) blurred.