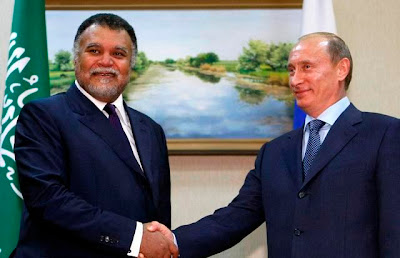 The Sydney Morning Herald is reporting a blockbuster, back room deal being offered by the Saudis to the Russians that could hand Moscow control of global oil markets.

Saudi Arabia has secretly offered Russia a sweeping deal to control the global oil market and safeguard Russia’s gas contracts, if the Kremlin backs away from the Assad regime in Syria.

The revelations come amid high tension in the Middle East, with US, British, and French warships poised for missile strikes against Syria, and Iran threatening to retaliate. The strategic jitters pushed Brent crude prices to a five-month high of $US112 a barrel.

‘‘We are only one incident away from a serious oil spike. The market is a lot tighter than people think,’’ said Chris Skrebowski, editor of Petroleum Review.

Leaked transcripts of a behind closed doors meeting between Russia’s Vladimir Putin and Saudi Prince Bandar bin Sultan shed an extraordinary light on the hard-nosed Realpolitik of the two sides.

The talks appear to offer an alliance between the OPEC cartel and Russia, which together produce more than 40 million barrels a day of oil, 45 per cent of global output. Such a move would alter the strategic landscape.

The details of the talks were leaked to the Russian press. A more detailed version has since appeared in the Lebanese newspaper As-Safir, which has Hizbollah links and is hostile to the Saudis.
As-Safir said Prince Bandar pledged to safeguard Russia’s naval base in Syria if the Assad regime is toppled, but he also hinted at Chechen terrorist attacks on Russia’s Winter Olympics in Sochi if there is no accord.

‘‘I can give you a guarantee to protect the Winter Olympics next year. The Chechen groups that threaten the security of the Games are controlled by us,’’ he allegedly said.

The Putin-Bandar meeting took place three weeks ago. Mr Putin was unmoved by the Saudi offer.

‘‘We believe that the Syrian regime is the best speaker on behalf of the Syrian people, and not those liver eaters,’’ he said, referring to footage showing a Jihadist rebel eating the heart and liver of a Syrian soldier.

Prince Bandar said that there can be ‘‘no escape from the military option’’ if Russia declines the olive branch. Events are unfolding exactly as he foretold.

This story is utterly bizarre.  It reeks of the bogus Kuwaiti babies turfed from their incubators story that was used to bolster support for Bush Sr's Desert Storm.

The cynical interpretation is that a calculation has been made that syrian oil interests and the capability to put bases in syria is valued higher for american national interests than having a monopoly on how saudi oil is developed.

Which, coming right after these chemical attacks really makes me wonder how much was centrally orchestrated.

Mound, I wonder how U.S. will react to such an offer. Although they want Russia to back off from Syria but at the same time they don't want Russia to control the oil cartel. I believe a lot of oil wells in Saudi Arabia are owned by U.S companies and European companies.

This will be a direct threat for U.S. I watched a two hour documentary on "What Putin wants from the west" (This may not be the exact title). It takes back to 2001 to 2012 and power struggle between U.S and Russia. It sounded that these two nations run the whole world. With U.S having a slight edge over Russia.

Documentary is: "Putin, Russia and the West."

L.D., in this heated, pre-war period, I'm reluctant to buy sensational stories such as this. There are too many spin-meisters at work. Who leaked this story? Putin? The Saudis? Assad maybe? Another party?

Mound, I should correct myself. Saudis bought back all shares of Aramco from the U.S. company.

It sounds sensationalist. On the other hand, on the face of it the offer sounds like a pretty good one. If it was made, however, I can well imagine Putin turning it down because Putin is not a patsy and he's aware of one basic fact about the world: People lie.

His natural assumption would be that the plan actually involved him pulling back and then afterwards the Saudis saying "Deal? What deal? We would never have agreed to something so threatening to the interests of our American allies. You must be imagining things."