Drop Duffy - Not So Fast. 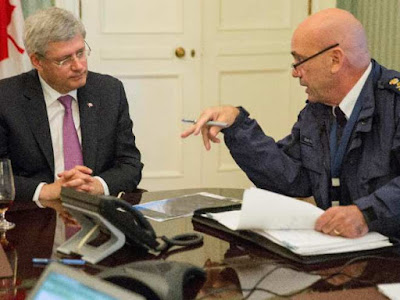 Veteran Canadian journalist, Geoffrey Stevens, argues that it's time to shut down the trials (and tribulations) of senator Michael Dennis Duffy.

As Stevens sees it there are two trials underway - one for public consumption, the other for the now redundant betterment of Shifty Steve Harper. A criminal trial and a political trial. Of the two, he contends, the criminal trial has already collapsed and the defence hasn't even gotten its chance at bat yet.

"To put it charitably, the Crown's case has been less than overwhelming. It has done more to help the defence than the prosecution. We have learned that Harper appointed Duffy in late 2008 as a senator from Prince Edward Island knowing full well that he had been resident in Ontario for years. We learned that the Senate expense rules were flexible enough that no one blew the whistle when Duffy declared his cottage in P.E.I. to be his principal residence and claimed accommodation expenses for his home in suburban Ottawa.

"We learned that the Conservatives valued "Old Duff" for his status as a media celebrity and his efforts as a cheerleader and fundraiser at party events; he regarded that as part of his job as a Tory senator, and some of his travel costs were charged to the upper house. Although Duffy certainly pushed the envelope, he was not the only senator whose expense claims, while accepted by the Senate, did not pass muster with the auditors.

"Of the 31 charges Duffy faces, the key one is bribery — the $90,000 personal cheque Nigel Wright wrote to enable Duffy to repay expenses that auditors had determined he should not have claimed. Yet the central question remains: how can Duffy be convicted of accepting a bribe when no one is charged with offering the bribe?

"The "other circumstances" were the political considerations. Bent on pursuing his "tough-on-crime," Stephen Harper could not afford to allow presumed fraud to go unprosecuted when it appeared just down the hallway in the Senate chamber. Mike Duffy being the most egregious offender identified by the auditors, he became the target in a show trial that, as it transpired, would reveal more about the PMO's frantic efforts (hundreds upon hundreds of emails) to cover up its involvement than it would about the ethical sins of senators."

"To put it charitably" Justin Trudeau cannot halt the prosecution as Stevens urges. This matter is before the courts. It is, in a nation of laws, now beyond the control of any premier. It must run its course.  As the political persecution aspect becomes more obvious, Duffy's very capable counsel can - and will - deal with that.

If, however, there is substance to Stevens' claim that this is, at its core, a political prosecution - effectively a state persecution - that is something that Parliament needs to expose and see that the miscreants behind it are held to account. It's hard to imagine there could be a political trial without an equally political investigation, one in which the supposed recipient of a bribe stands trial exposed to imprisonment while the person who furnished the bribe is declared blameless. That raises the spectre of a state police force corrupted. On that score we need some straight answers to some tough questions from Stephen Harper and his handpicked RCMP commissioner, Bob Paulson.

In fact it might be Paulson and Harper who deserve to have their day in court.

Update:  I discussed this with Geoff Stevens via email this morning. While he agrees that some sort of enquiry might be warranted, he's of the view that "Parliament won't go there."

Yes, Mound, it seems as though the shadow of genuine political corruption continues to loom large over this prosecution/persecution. Surely the question "why was Duffy charged for accepting a bribe when no one was charged with giving that bribe?" must continue to be on the minds of every fair minded person in the nation. And the only coherent answer still seems to be a direct political interference in the justice system. If this goes uninvestigated by the new government, then its failure to act is nothing short of aiding and abetting.

Hi, Kirby. It does speak to a corruption of the state police apparatus by our former prime minister. That is an extremely serious matter that has to be exposed and rectified. I'm convinced that the RCMP has been in the bag for the Tories at least as far back as Zaccardelli when he floated the groundless Ralph Goodale 'scandal' in the midst of the election that saw Harper come to power. Then came Bill Elliott, a long-time Tory operative parachuted in by Harper. Given this prime minister's instincts is it believable that he would not have insisted on someone "reliable" to replace Elliott?

Harper was Canada's Grand Corruptor. What he couldn't corrupt he gagged or eliminated. Everything was butchered to ensure it became his personal, partisan political agency. Why would the RCMP be spared?

Harper's not gone yet. He won't be until he submits his resignation, Johnston accepts it and offers JT and the Liberals the opportunity to form a government.

We already know full well Harper has no respect for Parliamentary tradition or convention and Johnston is his creature.

Harper may yet have another shaft in store for the country.

Although uncommon it is not unprecidented for costs to be awarded to the defendant in a malicious prosecution. From the first week I thought the judge will dismiss at the end of the crown's presentation.

I note that Dave over at The Galloping Beaver believes that Harper is maintaining his seat in Parliament to avoid being called to testify at the Duffy trial, Mound. He may be on to something.

Dana said..., "Harper may yet have another shaft in store for the country."

I'm sure he does. I expect Harper and his crew to be unmerciful in opposition.

Harper will be sitting in caucus meetings and we can bet that whomever is sitting as "Leader" will be his puppet.

Johnston would be tarred and feathered if he didn't summon Trudeau to form government - and soon. I'm not sure the GG's prostate would welcome the ride out of town on that fence rail either.

@ Rumley - this won't be over with the verdict in the criminal trial. I really can't say more at this point. A lot of Duffy's former Tory senatorial colleagues would just love to have this go away. They're extremely nervous about having their own actions examined.

An award of costs won't suffice.

@ Owen - that might have worked when Harper was a sitting prime minister but he's just an opposition backbencher now.

@ Toby - unless Harper, from "beyond the grave" manages to pull off the greatest exercise in damage control in Canadian political history, I doubt that he'll be calling any shots for much longer. He held the Tory caucus together with fear and intimidation. He's lost both of those cudgels now. Read Owen's post today about the Tories nascent civil war.

Just because the Harper Government was defeated doesn't mean they're going to go away in an orderly fashion. The trashing of offices and destruction of equipment by the short pants brigade has probably already begun. The shredder trucks have already been busy.