Justin's Dream Girl Steps Up to the Plate 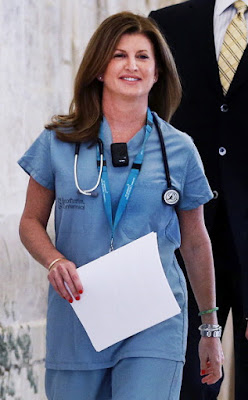 Canada's answer to Michelle Bachmann will be seeking to become interim leader of the Conservative party.

Rona "Big Hair" Ambrose says she's just the gal to take Justin Trudeau to the mat and wrassle him into submission.

"We must focus on challenging the Trudeau government by defending and promoting the conservative values and policies that so many Canadians embraced and voted in favour of," she said in a memo to her caucus colleagues.

"Our party needs to stand united and strong in the fight to ensure that taxpayer dollars are spent wisely and that government programs are managed effectively. The Liberals must be held accountable for their actions at every step."

It's too good to be true. The chance of the social conservative vixen scoring interim leader is a real long shot. That said, it would be hilarious, and it's been a long time since we had much of that in the House of Commons.

Photo - the late health minister decked out in scrubs, stethoscope and pager making her rounds. Maybe no one pointed out that her degree is in political science.
Posted by The Mound of Sound at 1:57 PM

Brad Wall would be a good choice for Conservative leader. Except he says doesn't want it. John Tory is also sane and clean, but not as electable. Maybe even Kevin Falcon could be persuaded to put his hat in the ring.

It should be obvious to the party that the leader should come from outside the caucus, or at least, not from those who had served in Harper's last cabinet. They would all be rightly perceived by the public as ignorant, impotent Harper toadies.

Oh c'mon, Chris. Ambrose would be good for a giggle.

lol, this is gonna be fun!

Speaking as a senior, I have to say I have never regarded Ambrose as anything but a dullard. Obviously short of any relevant knowledge in the cabinet posts she has held, responding to all queries as if they were being posed by an extraterrestrial, her appointment as interim leader of the opposition would be welcomed by anyone with an actual brain. As in, her ineffectual leadership would further expose the complete lack of vision the Conservatives possess. Unable to think outside of an ideological box, which for some unknown reason they regard as some sort of societal given, the paucity of new ideas and constant harping at any new proposal whatsoever, beyond ordering people about, I wish these Reformers would simply waste away to nothing. I regard them as unCanadian and too dim to realize it. Hence Ambrose as interim leader strikes me as the height of Conservative brainpower, and therefore so small as to be hidden from general view.

I don't think it matters who the nominal interim leader is. Harper will be the decider and string puller. Even once the eventual convention chooses a new and improved leader the Harperite brand will remain and pig headed ignorance and thoughtless devotion will still be the watch words of the brand.

Dana, I think you're right. Harper might not be actually pulling the strings but, unless he bails out early, I expect he'd influence the selection of his successor and I can't imagine he'd stand for Rona as the one.