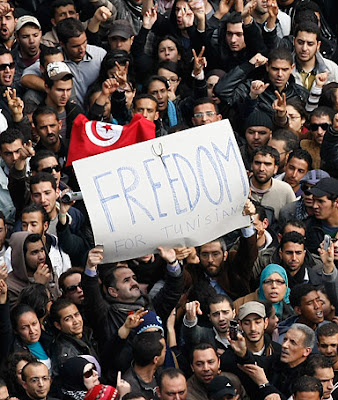 "Starting in 2011, the four members of the Quartet — the Tunisian General Labor Union, the Tunisian Human Rights League, the Tunisian Order of Lawyers, and the Tunisian Confederation of Industry, Trade, and Handicrafts — have served as crucial mediators among Tunisia’s various political forces, pressing relentlessly for compromise. Without them, political leadership in Tunisia might have been more combative than collaborative, derailing the democratic transition.

"In this context, the prize marks a remarkable achievement in the history of a nation that rose up five years ago and overthrew a strikingly durable and repressive regime. Since then Tunisians have exercised remarkable restraint and compromise as they have struggled to overcome the legacy of autocracy and the rise of new extremist threats."

In March I argued that Canada should stop wasting time and effort waging a futile bombing campaign against ISIS in Iraq and Syria and should, instead, allocate our forces in support of Tunisia should Islamist radicals try to get a toehold there.

Our approach to ISIS - bombing - is futile. It amounts to "we'll bomb ISIS here but not there, there, there, there or there." Sounds pretty rational, doesn't it? Sort of like the Brits figuring to defeat Hitler by liberating the Channel Islands. Then again, you can never underestimate a government that has Harper at its head and Jason Kenney as its defence minister.

If we wanted to give ISIS a setback, we could begin with Tunisia. That's a great place to draw the line, to stop the spread of radical Sunni Islamists. We might not get to bomb anybody but sometimes you have to sacrifice for the greater good.

Why Tunisia? Because it has a population ready to turn out by the tens of thousands to denounce extremism. And these people know a thing or two because they're the same crowd that sparked the "Arab Spring" and achieved a stable democratic system for it.

Let's back Tunisia. Let's give them at least as much support as we're squandering on Iraq to make sure they have everything they need to anchor their democracy and deny ISIS the power vacuum so instrumental to its spread. Draw the line, stop the fanatical brigands here, and then slowly begin rolling them back.

...Our role won't be political or cultural. There'll be no economic back story. It'll simply be that we, Canada, have decided that Tunisia shall not be threatened, or attacked and never, ever destroyed. And we, Canada, (not some coalition of the feckless and compromised) will stand surety for their democracy and liberty.

We're doing this not just for Tunisia but for us too and for everyone else. Where better but a stable, democratic and free (from both Islamic and Western dogma) Arab state to bring the Muslim world into the 21st century and show that Islam and democracy are not remotely mutually exclusive.

Tunisia should really be seen by the outside world as the true, irreplaceable gem in the crown. Where are we if we lose that?

I am delighted that this Tunisian peace group won the Nobel prize but that's no guarantee it won't encourage the Islamists to try to knock them off the rails.  It was just four months ago that Islamist gunmen massacred tourists on Tunisia's beaches. More could follow. The idea that I raised in March still stands. Canada should stand surety for Tunisia's democracy, liberty and peace.

Having been there I have a soft spot for Tunisia. You are right. We in the West would be much smarter to befriend those countries which are trying to solve their problems with moderation rather than those which function in extremes of cruelty and chaos. Tunisia would be a great place to start.

Another country I have a soft spot for is Turkey. Like Tunisia, Turkey has some awful neighbours which make it difficult to be moderate. How does regain composure after an attack such as that in Ankara this morning? The Turks will try.

Hi, Toby. I'm not sure any of us know where Turkey is heading. It's so desperately trying to be Western yet that seems to be driving its desire to dominate its Muslim neighbours. How does moderate, peaceful Islamism survive with radical, violent Islamists at its borders?