The Real Bruce Carson Scandal - The One You Paid For 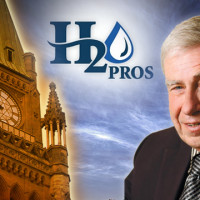 Former Harper aide Bruce Carson had a one-day trial last month for illegal lobbying. That involved a water purification venture that he pitched to First Nations groups on behalf of his then stripper/escort/girlfriend.  Dirty Old Man stuff indeed.

But old Brucie's fat is still very much in the fire. This time it goes beyond Carson's sordid indulgences and extends right into Harper's cabinet, his PMO, the University of Calgary and Canada's major oil producers.  The Tyee's Andrew Nikiforuk describes it as Canada's biggest political scandal you never heard of.

The tale involves Big Oil, millions of taxpayer dollars, call girls and someone the RCMP describes as "one of the prime minister's longest serving advisors": Bruce Carson.

And it largely took place at Stephen Harper's alma mater: the University of Calgary between 2009 and 2011 with a cast of industry CEOs as well as several Harper ministers and aides, including Nigel Wright.

The basic plan was to use $15 million in taxpayers' money for a university think-tank, chaired by Carson, to foster with industry and the federal government a plan to rebrand the oilsands mega-project as "responsible" and "sustainable" and "clean."

The name of that think-tank Carson would run: the Canada School of Energy and Environment (CSEE).


The 1989 Lobbying Act bans public office holders from lobbying for five years after they have left office.

The act requires anyone paid to communicate or set up meetings with federal public office holders on a variety of subjects set out in the statute to register their activities in the Registry of Lobbyists, a federal list with more than 5,000 names.

The act, however, is weakly enforced and full of loopholes. Between 2005 and 2010, the nation's lobbying commissioner referred only 11 cases to the RCMP. No charges were laid.

Since then the Office of the Lobbying Commissioner, the RCMP and Crown prosecutors have decided not to penalize 67 lobbyists caught violating the act and Lobbyists' Code of Conduct.

Their identities have been kept secret.

To date, only one person has been found guilty of violating the act, and only two other people have been charged with violating it, including Bruce Carson.

Democracy Watch calculates that nearly 1,600 people have violated the Lobbying Act and Lobbyists' Code of Conduct since 2004, but that 95 per cent of them were not caught and that 81 per cent were left off the hook.

"Lobbying Commissioner Karen Shepherd has clearly failed to enforce the federal lobbying law and code effectively as she has failed to even name and shame 81 per cent of the lobbyists caught violating the law," saidDuff Conacher, co-founder of Democracy Watch and visiting professor at the University of Ottawa in a 2015 press release.

Conacher says the act needs to be strengthened as recommended by a 2012 reportby the House of Commons Standing Committee on Access to Information to end secret and unethical lobbying.

The Harper government promised during the 2006 election to end secret lobbying of the federal government, but to date it has not kept its promise. -- Andrew Nikiforuk

The whole case shows clearly that [the] prime minister didn't care about the ethics of who worked for him as long as he thought they could help him win and stay in power," says Duff Conacher, co-founder of Democracy Watch and visiting professor at the University of Ottawa.

"And it shows clearly that the Conservatives broke their promises to clean up the federal government."

Which brings us back to the PMO and Harper's litany of lies when the media finally got wise to the jailbird in the prime minister's office. In true Harper form, this equally unprincipled prime minister, anted up with the opening lie. This began with the story that Harper was let down by his staffers who failed to properly vet Carson before he was allowed into the PMO. Harper said if only he'd known about Carson's criminal background he would have never set foot inside the PMO. When that bluff didn't work, Harper went for the follow-up lies, eventually conceding that he knew just a little bit of Carson's background but thought the guy deserved a second chance, an opportunity for redemption.

By Nikiforuk's account, that was all pure, unadulterated, prime ministerial bullshit.

Carson, who looks like pugilist, long has had ties to Stephen Harper and the Conservatives. He served as director of policy and research for the federal leader of the Opposition from 2004 to 2006.

Harper liked what he saw. After the election Harper promptly elevated Carson to senior advisor from 2006 to 2008. In 2009, Carson also assisted the government with its federal budget.

The political power broker had a formidable reputation. He often described himself as the "mechanic," a political fixer who got things done in the corridors of power.

In fact, Harper often began conversations with his former top advisor "in his usual complimentary way," writes Carson, by saying since you are "familiar with every vice known to man," can you help me with this or that problem.

..."The Duffy scandal was about trying to cover up an expenses scandal, but the Carson saga shows the rot goes much deeper," says Keith Stewart, head of the climate and energy campaign for Greenpeace Canada.

"Carson could lobby for the oil industry at the highest levels without anyone raising an eyebrow because the Harper government forgot that they work for Canadians, not oil CEOs."

The courts have yet to rule on any of the charges against Carson.

Stewart met Carson just once at an Energy Café organized by Shell in Calgary in 2011 before Carson's energy world came undone.

According to Stewart, when Stewart introduced himself, Carson blurted: "Will you take down that blog you wrote about me?"

Stewart's blog detailed EPIC's lobbying efforts. But Carson was most upset that Stewart had mentioned that the former advisor had been disbarred as a lawyer.

The blog remains.
Posted by The Mound of Sound at 9:56 AM

It clearly shows that Harper has zero respect for lawful order he is out of control. It seems the most he will be able to pull off is a minority Harper-con government at this point. I believe that CPC would have a leadership race if that happens and I hope I am right.

If the governor general is so corrupt to allow Harper to form a minority government knowing that the opposition parties, holding a significant majority of seats, won't support it then we'll be back into another election in no time.