If You Have Trouble Making Sense of this Fiasco Now, You'll Want to See This. 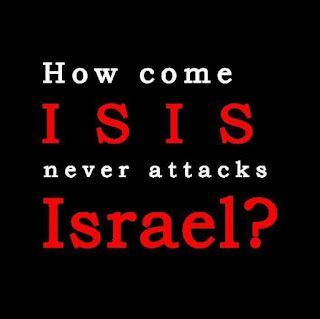 Now that ISIS is still running all over the Caliphate (borderland of Iraq and Syria) and the blood feud is underway between the Hatfields (Russia) and McCoys (Turkey), you might want to have a look at this heavily-redacted American intelligence summary from 2012.

In the overview section, it describes the Western supported "opposition" to the Syrian Assad regime as comprising the Muslim Brotherhood and al Qaeda Iraq operating as al Nusra.

In paragraph D it notes that the Syrian opposition is fighting because of what it claims is Assad's war on the Sunnis and its support of Infidel regimes (Shiites) such as Hezbollah, Iraq and Iran that it collectively labels "dissenters."

Paragraph 7B outlines the protagonists of a larger, proxy war with Russia, China and Iran aligned in support of Assad while the United States, the Gulf States (Saudi Arabia, Kuwait, Qatar, etc.) and Turkey are backing the opposition - already defined as the Muslim Brotherhood and al Qaeda in Iraq (al Nusra).

Then there's paragraph 8C which discusses the establishment of a Salafist principality, the very thing we now call with dread the "Caliphate" in eastern Syria. It goes on to say, "this is exactly what the supporting powers to the Opposition want." The 'supporting powers' - that's us, Saudis and the Turks. Why do we want it? It's all about containment - of the Shiites. Gotta contain those Shiites even if it means handing over a vast swathe of Syria and Iraq to Salafist Islamist dominion.

It's all wrapped up in paragraph 8D where it's acknowledged that, for the Salafist radicals, this is all about "unifying the Jihad among Sunni Iraq and Syria, and the rest of the Sunnis in the Arab world, against what it considers one enemy, the dissenters."

In other words, as far back as 2012, our head office (Washington) was backing what would emerge as ISIS in the launching of a Muslim holy war pitting the Sunni Muslim (Islamist) states against the smaller and weaker Shiite Muslim states.

And that, kids is what this f__ked up air war of ours has been all about. Only now we're going to supposedly lay into the Islamists, sort of. Only we won't attack their oil tanker convoys until Putin puts us under the spotlight and we won't admit our allegiance to the state sponsors of Islamist terrorism, our allies.

We're up to our necks in this murderous mess.
Posted by The Mound of Sound at 12:17 PM

Sorry, Mound, I'm a bit confused on this one. What does the this have to do with your opening frame, "How come ISIS never attacks Israel?"

Its obvious implication is that ISIS is the MAN.

Toby, what this US summary implies is that ISIS is, as I had expected long ago, the shock troop of the Sunni campaign against the Shiites. Back in 2012, "the opposition" was backed by the Turks, the Saudis, the other emirs, sheikhs and princes of the Gulf States and the Americans as a means of reducing Assad and, thereby, containing Iran. Israel is on side with this which probably explains why ISIS has blown up targets almost everywhere but Israel. Strange bedfellows indeed.

With America's nuclear detente with Iran it seems that the dynamic shifted. America realigned against ISIS but the rest of the original crew - Turkey, the Gulf States, Egypt did not. Israel perceives Iran through its support of Hezbollah and the Palestinians as its strategic threat, not ISIS which seems to have reciprocated by not attacking Israel.

The whole business is incoherent and underlies the folly of Canada participating in this farce.

Mound said, "The whole business is incoherent and underlies the folly of Canada participating in this farce."

I certainly agree with you there. Wherever the Arab Spring hit, with the exception Tunisia, we couldn't find any good guys. Syria seems to be the worst but not unique in the ME. Quite awhile back I assumed that the US stirred up trouble it can't control. There are many within US administrations, past and present, who seem to run around kicking sleeping pit bulls just to see how much chaos they can create.

I also assumed that Israel was in the mix somehow but I've never known how, exactly. They are in the neighbourhood; it would be very surprising if they weren't mixed up in it.

As to your links I take with a grain of salt any one who asserts "that Obama is using NAZI tactics to take over America." I give no credence to America's ranting class.

Is the CIA harbouring ISIS? I doubt it. I'm sure they aided and abetted two or three years ago but I'd be surprised if they didn't drop ISIS like a hot potato when the gore started showing up on Youtube.

No, it's preposterous to suggest that Obama is trying to take over the US especially by "Nazi tactics" although, in the Age of Trump, many Americans are exhibiting the critical thinking that brought them the Salem trials.

And, yes, America has "stirred up trouble it can't control." Surely that began with Washington's decision not to crush al Qaeda in the mountains of Tora Bora and invade Iraq instead. The sheikhs and princes of the Persian Gulf have done much the same with ISIS. It seems they just keep trying to find ways to drive back Shiite Islam.

The document offers an interesting window into America's posture in 2012 when Iran, with its nuclear aspirations, was cast as the real villain in the region. Washington seemed to prefer an alliance with Turkey and the Gulf States aimed at "the dissenters" (Shia) and, even at the risk of a Salafist Sunni state in Syria and Iraq, doing whatever it took to roll back Tehran's sphere of influence.

The Sunni states haven't really shifted from 2012 but America has. Washington (and its partners) cut the nuke deal with Tehran and now we're all happily bombing ISIS even as the collaboration goes unmentioned.

I would still like to know who managed to put a blanket over the Putin/G20 story. Czar Vlad shows up with an intelligence dossier of 40-countries supporting ISIS, adds that some of them are at the summit, and it's nowhere to be found in any US or Canadian newspaper. Undoubtedly Putin's dossier fingered Saudi Arabia and Turkey. Within days airstrikes, US included, were taking out massive oil tanker convoys seeking to enter Turkey. I wonder if that was on Erdogan's mind when he ordered the shootdown of the Russkie Su-24?

Mound, you nailed it. The part I don't understand is that why U.S/West is fighting ISIS now. Sounds like Former USSR invading Afghanistan and U.S creating Jihadists which later became Taliban. Rest is History.

The main beneficiary of the current situation is indeed Israel.

Hi, LD. Again we're seeing the "wheels spinning within wheels" phenomenon in play. Iran bombing ISIS in Iraq. Turkey bombing the Kurds in Syria and Iraq. Russia bombing the Syrian rebels. The US and friends bombing ISIS in Syria. The Saudis and Sunni states bombing Houthi rebels in Yemen. Turkey providing a conduit for ISIS oil to world markets. They you've got the Turkmen rebels, the Kurdish rebels, the Syrian Free Army, al Nusra and ISIS fighting both Assad's forces and each other.

It's a foundational mess. I think the US is fighting ISIS mainly because they see it as a threat to the government they created in Baghdad that, sadly, is hopeless at defending Iraq. ISIS was also extremely successful at terrifying the American people with its hyper-violent, explicit videos. ISIS needs us to keep the fires burning lest they lose their ability to recruit newcomers and their funding lines with the Gulf States.

All very interesting but here's a recommendation: don't start off your post with a picture that makes it sound like you're about to say the Jews control ISIS. I nearly unbookmarked you for that sole reason alone.