I'm Just Not Sure Anyone Who Matters Really Believes It. 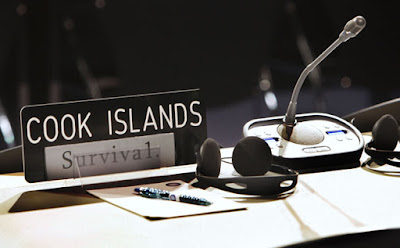 We should all defer to the science types and their powerful consensus when it comes to us, the laity, having to make decisions on complex issues such as climate change. I have no scientific background in these things but I do follow these issues, take a course every now and then and read what can seem to be a river of 'executive summaries' of new research studies and reports.

We live in a world that has become managed by administrators following belief-based ideologies, often little more than dogma. It's the confusion, the inconsistencies and contradictions that give it away. When something doesn't seem to be working you can usually find some sort of belief-based thinking at the root of the problem. It's a world of fundamentalism fueling ever more fundamentalism. That is why evidence-based information is so refreshing, even reassuring. It means the guy behind the wheel actually has his eyes on the road ahead. That's a good thing.

It can also be a source of great worry. For example, next week's global climate summit, COP21, in Paris.  COP21, that's a lot of COPs, too many. The number reflects, in no small way, the obstructive power of belief-based thinking of the sort we experienced from our man, Harper, Australia's Harper clone, Abbott, and the neo-conservative Bush administration. There was a bag of fundamentalists and, thanks to their handiwork, any chance at an effective agreement on forestalling the worst impacts of climate change was kicked down the road, again and again and again. Which is why we're at #21.

The important thing is what the science types are telling us is the unique significance of COP21 that distinguishes it from, say, COP7 or COP16 or any previous COP.  What a lot of them are saying is that this one, COP21, being held next week in Paris, is our "last best chance" to find a solution that could fend off catastrophic, runaway global warming. Scientific American has labeled COP21 a "do or die" summit. SA has loads of articles on what we need to do in Paris next week.

"We have entered what might be called the Anthropocene thermal maximum, an era of global warming driven by one species penchant for burning fossil fuels and cutting down forests. Right now in 2015 may be the last time anyone breathes air with average CO2 concentrations below 400 ppm, as this number marches seemingly inexorably upward. But we don't have to keep adding to that number forever."
Over at Grist.org, COP21 is heralded as the "last best chance for the world to save itself."

"We are out of time to start swiftly cutting emissions and regrowing our forests and grasslands. There may be ways in which climate change isn’t as dangerous as nukes, but one way in which it is even more so is its irreversibility. If you fail to strike a nuclear non-proliferation deal with Iran in 2014, you can make one in 2015. As long as they don’t yet have nukes, the crisis has been averted for the time being. Climate change doesn’t work like that. If you fail to strike a climate deal and coal plants and tankers and cars keep spewing carbon pollution, you cannot undo those emissions. The failures of Kyoto and Copenhagen and the years that followed have left us up against a wall. The countries of the world must come together now or they will suffer together later."

Our current prime minister is promising a new and invigorated approach to fighting anthropogenic global warming and, with the possible exception of Saskatchewan, he seems to have the premiers onside. What is unclear is whether any of our leaders, federal or provincial, really believe this is our last best chance, our do or die moment. Can they somehow wrench this issue from the gaping maw of partisan politics? Will they do what the crisis demands or settle for as much and as little as they think they can get away with? If, when they return to Canada you begin hearing weasel words and the sound of cans being kicked down the road you'll have a pretty good indication.

Anyong said....Ask anyone in Alberta how they voted in the last election and they will all say, "I didn't vote NDP". "Ha". Vocally, people in Alberta are back to square one regarding the Climate. Hopefully this present government can get their proposed policy in force before the next election. That means, most people are in AB are in Bill Walls lap. This comment doesn't mean much having not been substantiated by any facts but there it is. I won't be on here for a bit of time except for having time to read your blog maybe. A family member is now in palliative care and I am waiting to hear if I am free from the dreaded devil. So with that it is "cheerio" for now. Merry Christmas and a Happy New Year.

Good luck with the difficult days ahead, Anyong. This can be such a miserable season for us as we get older. I hope you can have a Merry Christmas and a better year in 2016. Cheers.

Mound, let's hope that Paris meeting brings some meaningful results. Given the past records I admit that I am pessimistic.

It is little early but have a great Christmis.

Hey Mound,
you seem to track this stuff better than most so perhaps you can answer this one.
The recent (historic cause it marks a return to civility in this country) 1st Ministers conf. was apparently launched with an address by two scientists.

Any idea who they were? Hope one was Mark Jaccard (IPCC member & SFU prof).

I was lucky to attend a 2 hour presentation he gave a few years back. It would be real hard for any thinking individual (doesn't include Wall or any other CON detritus) to rest easy after listening to him.

@ NPoV - They were Alain Bourque of Ouranos and Greg Flato of EnviroCan.

Been down that road with parents and siblings. It is not a happy road to travel, but it does get better.

Some are seeing the light. However, I am afraid that we are all, ultimately, destined for the fate of "Easter Island - aka Rapa Nui".