I seethed just a little bit in recent days listening to vanquished Tories talk about how they're going to be "nicer" people in the post-Harper future. Some of them said they were just too mean, nasty sort of - not at all like the wonderful, kind, compassionate creatures they really were inside all along.

Wait a second, they're pulling the "Good German" defence. Vee did not like to do it but vee vas only following zee orders of zee legitimate authority, der Fuhrer. Right, blame it all on Harper. No, sorry, we decided a long time ago that excuse doesn't wash. We saw enough of you, for almost a decade, to know that you never hesitated to go nasty whenever the opportunity arose. At times you got so into character you even looked deranged, unhinged. 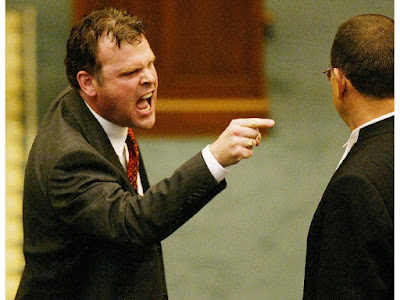 You were a scowling, churlish bunch, always ready to crush dissent by impugning motives, branding them as "inimical" to the country, demeaning their patriotism. And now you're Good Germans indeed.

And you did it collectively, the lot of you. Now, for you to try to make Harper, your fuhrer, take the blame it simply won't fly. However I think it warrants the coining of a new noun, a collective noun to describe the rancid lot of you - "asswhole." Yes, I think that'll do nicely.

Now they have "Rona the She Wolf" to lead them back.

There's not telling what might come out her mouth now that Harper isn't around to tell her what she thinks.

One has to wonder why it took most Canadians so long to figure out what some of us knew fifteen years ago, that Harper and his not so merry band were nasty. We did not need to go through the turmoil.

Give us electoral reform and they'll never come back.

Toby: the reality is that we didn't figure things out and, with a little statistical deviation on 'our side', we won. This time. However, there's still roughly 30-38% of the population of that believe in Harper the rest of his cabal. Efforts should be made to shut them down permanently, starting with a series of full investigations into some of the more obvious crimes committed over the last decade. Some will say it's overkill, but the point is to, well, prove the point about how crooked and mean these people are.

We don't have a parliamentary tradition of doing autopsies on outgoing governments, Toby.

Mound, it is truly stunning to read and listen to the usual suspects and their responses to the CPC loss on October 19. Maybe their "tone" was wrong? Your picture of Baird perfectly captures the essential CPC core.

The whole group of former CPC cabinet members (former and those present at the dropping of the writ) compare starkly with the recently named Liberal group of ministers (of course, as yet unproven!) who have CV's burdened with educational, professional as well as "real world" accomplishments.

The inability of Harper and those around him to examine their behaviour and ethics in the context of governance gives new meaning to "an unexamined life is not worth living".

I'm not sure that the introspection approach is particularly welcome with the movement conservative crowd, ATRQ. Theirs is a certainty anchored in a hardline ideology. It reminds me of Barry Goldwater when he opined that, "Extremism in the defense of liberty is no vice."