The Sea is Coming. Vancouver is Fighting Back with Sand Bags - For Now.

Take pity on the multi-millionaires whose homes line the waterfront in Vancouver's West Point Grey neighbourhood. Those magnificent homes are generally low lying and the rising sea is closing the gap. 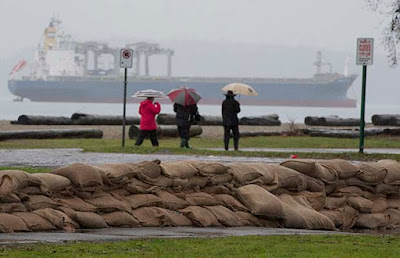 It held, this time. 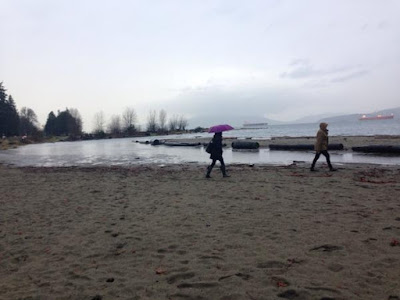 But sandbags won't hold the sea back forever and, as seen from these photos, the beach itself wasn't defended from inundation and erosion. It's the erosion from successive and worsening events, not flooding, that causes the real and lasting damage. It's the erosion that sculpts the shoreline.

It could be worse. Think of all those stars in Malibu who built their incredible mansions along the once spectacular beaches. 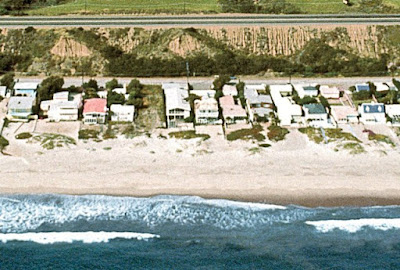 Those beaches are now gone, taken by the rising sea. 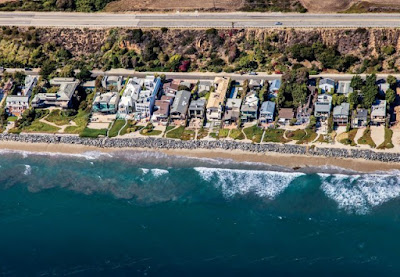 Now the seas reach out to the concrete barricades at the edge of their lawns. In some areas the sea has taken the lawns as well. Not hard to figure out what's next. 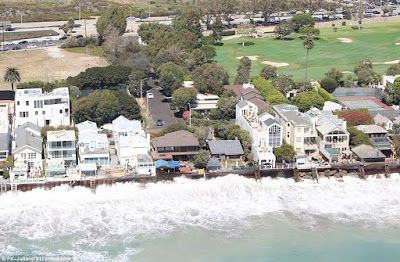 It's hard to imagine what the salt spray is doing to their houses. I live a block from the sea and I have to deal with a bit of corrosion. These places in the picture above, they'll have saltwater corrosion everywhere inside their homes and out. Their window glass must be horribly etched.

It's a curious thing to observe. We have a neighbourhood of fine but low-lying waterfront homes at the south end of town and a row of far bigger but also quite exposed and low-lying "McMansions" just north of me. The homeowners to the south are in a jam. Once or twice every year a high tide worsened by a storm surge and a mountain river overflowing its banks leaves them inundated and cut off. The municipality won't grant a permit for any construction in that area, not so much as a garden shed. And, if your house burns down or eventually succumbs to the effects of repeated flooding, your only option is to leave. Doesn't do much for the property values.

There's an article in the Toronto Star about the American experience. That's where you see living, breathing socialism for the rich in action in the Carolinas.
Another report in the series lightly explores the reality of sea level rise in Canada.

Provincial and local governments are still working from the now very old estimate of 1-metre of sea level rise this century. One municipal engineer I discussed this with said it's probably going to be 2-metres, perhaps even 3, but no one wants to go there because preparing for 1-metre is more than we're prepared to tackle.

Cognitive dissonance? Sure, especially in places like Miami where they're building condos and shopping malls with abandon even as sea level rise threatens to take down the local sewer and water systems. We're somewhat better but not very much.

People don't want to pay taxes to build systems that may protect some rich dude's waterfront property twenty years from now. Politicians, looking at their finite terms in office, don't have much incentive to bring down upon themselves the wrath of reluctant taxpayers just to "do the right thing."

It takes a good while for reality to set in. The Dutch struggled for decades to hold back the sea from land they had reclaimed in the past. Only recently have they begun to accept that parts of their coast will have to be surrendered to the sea. That is notional wealth lost, destroyed. There is no salvage. Folks have to write off their assets and start over. Governments aren't going to be able to cover their losses, not for very long.

It's already begun. Sea level rise is beginning to exact its toll and next year's sea levels will be higher again and on and on and on. This is yet another example of how anthropogenic global warming is changing the world beneath our feet. We're little more than reluctant spectators at this point.

What I find surprising, Anon, is how the provincial government steadfastly refuses to assist municipalities in their planning and adaptation strategies. My town's engineer said Victoria is leaving the coastal communities on their own. We had to commission our own consultants' report and undertake our own assessments, work out our own policies and adaptation strategies.You wind up with patchwork preparedness. Some communities want to kick the problem down the road while others are acting (to some extent) now.

I think there's a measure of denialism in play, Steve. It's not so much the result of fearmongering, not from what I'm hearing, as the enormity of the problem and a sense that we're not up to the challenge. It's not quite fatalism but similar.

Reminds me of that acronym from the financial crash: I'll Be Gone, You'll Be Gone.
Lot of that going around.

Yes, Chris, there is a lot of that going around. Some consider the greatest hurdle to effective action on climate change is that it's seen as the current generation having to sacrifice for the benefit, uncertain at that, of future generations.

That mantra conveniently overlooks the corollary that, by not acting to slash emissions today we are unquestionably worsening the hellish conditions that future generations will be forced to endure. Every additional gigatonne of greenhouse gases we emit from today onward will make future life, human and otherwise, that much more difficult, that much more tenuous and that much more brutal than it otherwise need be.

Once you invoke that corollary narrative, not slashing emissions becomes patently immoral and an affront to the sort of personal responsibility the libertarian crowd so cherishes.