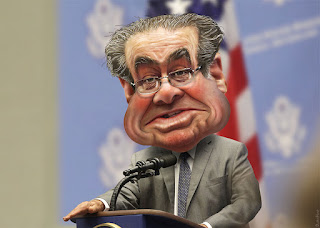 When moral corruption has infected your nation's highest court, how broken is your judicial system?

The court to which I refer is the United States Supreme Court, as politicized a court as we've seen in the English-speaking world for many centuries. It's a place that nurtures neoliberalism and lards it with hefty dollops of racism when and as required.

Enter Antonin Scalia, such a batshit crazy right winger that even Bush/Cheney brought in an outsider rather than hand him the Chief Justice slot. This is what rolled off Scalia's lips today:

Justice Scalia: There are—there are those who contend that it does not benefit African-Americans to—to get them into the University of Texas where they do not do well, as opposed to having them go to a less-advanced school, a less—a slower-track school where they do well. One of—one of the briefs pointed out that—that most of the—most of the black scientists in this country don’t come from schools like the University of Texas.

Mr. Garre: So this Court—

Justice Scalia: They come from lesser schools where they do not feel that they’re—that they’re being pushed ahead in—in classes that are too—too fast for them.

Where are America's lawyers in all of this? Where is the once powerful American Bar Association? Their silence is their acquiescence in Scalia's racist outrage and it becomes their complicity.

I am very uncomfortable with the parallels being drawn between post-9/11 America and fascism of an earlier era yet some are inescapable. Scalia's observations seem reminiscent of the "unter-menschen" ideology of racist inferiority that should be repugnant in any free, democratic state.

The conservative judges on the supreme court have come up with some "interesting" viewpoints over the years. The two that are probably the worst are Scalia and Thomas.

A Supreme Court Judge is not supposed to give his/her oplnlons in public. For that matter judges in general are supposed to keep such views to themselves. Scania has disqualified himself to remain judge. But no one has spoken out. Attorney General should have given her opinion on this one and remind Scania about impartiality his job requires.

Mound, I still have not gotten used to tablet and make many mistakes -especially spellings. Sorry!

This is the same Supreme Court that chose,over the voters, Bush as president. In a rational, democratic, constitutionally supported country, Scalia would have to step down.The fact that he doesn't, shows how authoritarian and fascist America has become. Where is the opposition from American citizens regarding this blatantly racist remark by a Supreme Court Judge? Why is Obama, a black man and The President of the United States not saying anything? His intelligence and ability to learn has just been insulted by a Supreme Court Judge!Fight Back!

Pamela, it boggles the mind. Then U.S claims to spread democracy - Afghanistan, Iraq etc. Should they not establish democracy in the U.S first.?

@ Pam. Scalia was appointed not merely as a justice of the Supreme Court but as associate chief justice by Ronald Reagan when Rehnquist was elevated to chief justice. He went straight into the #2 slot and it was a telling decision.

Even Pakistan's lawyers have endured violence, including death, and imprisonment to take to the streets to protest judicial corruption. Yet, in the United States they stand mute in their complicity.

Forgive me the non sequitur but I could not email you to mention this. - laugh - Saw a refugee kid get a teddy . . . and her face lit up. Time to flip the Maple Leaf on your web page right side up? smile

James, point well taken and many thanks for it. As soon as I can figure out how to correct it I shall.

I would write you an essay but, she speaks for herself.

The attitude of the Scala is unbecoming to a Supreme Court judge. His language is plainly discriminatory and inflammatory. Unfortunately, the people who study the subject of magnitude of AVERAGE intellectual differences between major human races (for starters - Caucasians, central Africans and Australian aboriginals) are tossed out with bath water as well. Those AVERAGE (again, note the term AVERAGE) differences are, in my opinion, solidly documented...
A..non

Thomas is an african american who seems to hate african americans. As one blogger noted: "Thomas voted with his fellow right-wingers to remove part of the Voting Rights Act, effectively allowing states (particularly Southern ones) to disenfranchise black voters. In 2014, Clarence Thomas again joined his conservative colleagues on the bench in upholding Michigan’s right to prohibit affirmative action policies when it comes to college and university admissions. In 2008, a wrongly-convicted black man in Louisiana who had spent 14 years on death row was awarded $14 million in a lawsuit. The verdict was later overturned by the Supreme Court – and Clarence Thomas wrote the opinion for the right-wing majority. To Thomas, holding the prosecutor liable for his misconduct in handling the case was somehow “unconstitutional.”"

Thomas takes the approach that racism is a fact of life, in spite of this, nobody did him any favours to get ahead, and civil rights and NAACP types are just whiners. Scalia probably has long since made him an honorary cracker.......