It was only supposed to be a joke. It's not a joke any more.

A couple of enterprising Canadians, Troy Paquette and Moses Lam, have found there's a market in Beijing for clean, Canadian mountain air.  This stuff: 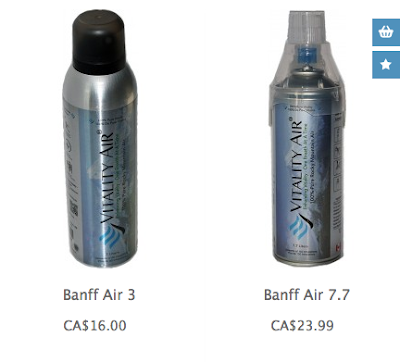 "The way we capture the air now is a bit of a trade secret," Paquette, who goes down to Banff and Lake Louise from Edmonton, Alberta to fill giant cans with air through clean compression, and brings it home to bottle it, told VICE News.

"As much as it started out as a novelty idea, with the really bad smog they've had in Beijing, we're finding people are buying it as more than just a novelty, but for everyday use" he says. "There's been quite a demand."

The canisters have a cap mask attached to it and contain about 150 1-second sprays.

Single and twin packs of cans are being sold from $16 to $46. Aside from China, interest has also come from places like Iran and Afghanistan, said Paquette.

Paquette says it took a while for the product to gain any traction, but since the smog alert issued in Beijing last week, demand has skyrocketed.

Lam told the Telegraph their first shipment of 500 bottles was sold in four days, and a crate containing 4,000 more is on its way to China.

And Paquette said distributors in China have expressed interest in carrying Vitality Air in stores.

Mound, I find it incredible. If current rate of pollution continues many other countries may need bottled air.

It's estimated that half of Beijing kids under 14 already have permanent lung damage. One can only wonder what sort of public health disaster waits in store for India.

Mound, I have learned a lot from your posts. This particular one scares me. Are we becoming new dinosaurs near extinction? At least dinosaurs were not responsible for their own extinctionn.

Well, LD, given that just two days ago an Indian official announced that country would double its coal consumption by 2020 - DOUBLE in just the next five years - it seems that India is prepared to lay waste to a lot of its people.

Paquette should rot in hell for peddling useless product (those canisters are non refillable, likely difficult to recycle) which can only hold ~5-10 bars, good for a couple of breaths...
A..non

If India can't or won't clean up it's act maybe they'll contribute to the overpopulation problem.

The good thing, A..non, is that the stuff is going to China where they know better than to send aluminium to the garbage dump. I'm sure it'll find its way home soon enough on some Wal-Mart shelf in the toaster section.

@ John's aghast - Both India and China are in the grip of a powerful form of cognitive dissonance. Analyses of the public health crisis that's looming in their cities suggests it could severely destabilize their government and their economies. I was accustomed to the particulate numbers in Beijing, Shanghai and other Chinese cities but I was floored when I saw the Indian urban numbers.

This public health crisis is just another layer, one factor compounding so many other seemingly unresolvable and potentially explosive threats. The Chinese have a major problem with arsenic and heavy metals contamination of their farmland - airborne industrial waste - that renders it incapable of producing food fit for human consumption. Both countries have a desertification problem. Dust clouds rise over China cross the Pacific and descend in western North America. When I dust my furniture apparently 15% of it has just arrived from China. And both have a major freshwater problem - groundwater and surface water compounded by the retreat of the Himalayan glaciers. That part of the planet is one enormous mess.

In the sixties, an entrepreneur printed a pretty picture of Vancouver, captured on a clear sunny day, on labels for standard 15 oz. tin cans. The labels identified contents of the sealed but empty cans as pure Pacific air, or something similar.

I understand the cans sold quite well for a while, particularly at tourist spots. I always thought the idea would be revived. Now, I'm waiting for a new supply of pet rocks.

All a person can do, is laugh, laugh and laugh more or else end up crying, crying and more crying.