A Primer for a Prime Minister 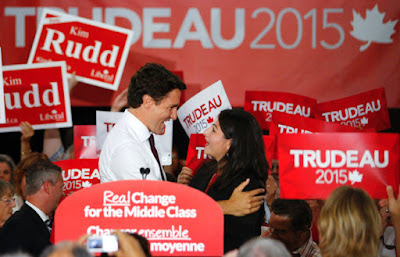 It's almost impossible to discern how much our prime minister really understands about globalism and the neoliberal order. He claims he gets it but that's far from clear. The prime ministerial confusion was manifest in his interview today in The Guardian.

It was with some relief that I came upon a helpful treatise on neoliberalism by Sandra Waddock in today's Christian Science Monitor that explains not only how it has failed us but how we might get out of this disastrous rut. Waddock, the chair in corporate responsibility at Boston College contends the way out begins with a new narrative. Hint: sacrificing national sovereignty to a parallel corporate power structure simply in pursuit of endless growth and unfocused wealth creation is not on.

The success of these memes speaks to why business students so readily identify the purpose of the business as maximizing shareholder wealth and with the language of free markets and trade. They are simple, identifiable and based on laudable values like freedom and individual responsibility, after all: things that Americans in particular, with their individualistic orientation, can readily identify with.

Their power to convey the underlying economic "story" illustrates why change that seems to astute observers to be necessary – change toward more sustainability, dealing with climate change and fostering greater equity – is so difficult. Neoliberalism's pursuit of endless growth, efficiency and free trade have led to setbacks in curbing climate change, enhancing sustainability and reducing inequality, all of which are potentially existential crises for humanity.

...What is needed, as happened with the creation of neoliberalism's core narrative, is that a new set of memes framing a new economic and societal narrative needs to be established. An emerging group called Leading for Wellbeing and composed of global organizations, universities and newspapers is attempting to do just this, built on the notion that the world's major institutions and businesses should "operate in service of well-being and dignity for all."

Tomorrow's narrative needs to be framed very differently from today's. It needs to recognize that economies are part of societies and nature but not the only important thing. A new narrative should frame the purpose of business very differently, taking different stakeholders and the natural environment into account. It could also provide a more reasonable and effective basis for resolving the key crises of our time, such as the warming planet and the growing gap between rich and poor.

Dignity and well-being can be enhanced, for instance, by emphasizing job creation and stability, fair wages and fair markets, rather than financial wealth, efficiency and growth. Measures like the Genuine Progress Indicator would incorporate well-being and individual dignity into the measure of an economy, as opposed to merely its activity, making it a great substitute for GDP or GNP.

If we hope to overcome this tide of populism and nationalism sweeping the West, a new, more powerful narrative is desperately needed – a new story that proves more compelling than the one that brought Trump and populists in Europe to power.

For those despairing whether there would ever be a way out of this neoliberal morass, Waddock's essay is a shot in the arm. Just to be able to imagine a society not enslaved to an obsession with wealth, efficiency and growth regardless of the devastation that unbalanced pursuit has created is really quite wonderful.

What she discusses in many ways echoes the basic precepts of early 20th century progressivism. Maybe that's where our future lies.

The rest of us slugs don't get our measure of crumbs until the wealth creators together with the best players in supporting roles - their superstars and a few of their current and aspiring sycophants - have grabbed or been handed everything they can carry. And there's no limit to that.

Soon, they won't even need to keep us alive. The machine must have its grain too, but it doesn't demand any more than what it takes to keep it running and doesn't know that it's stuck somewhere in the process of being replaced.

That all is, of course and with apologies to Ayn Rand, if we let them.

The constant problem with machines, John, is that they really have little appetite for hitting the malls on Saturday. They can make no end of stuff but, without consumers, that stuff becomes a loss, not an asset.

When I was a kid we were taught that capitalism was unique to democracy, the flip side of the same coin. What a load of bollocks.

That’s correct Mound, but much of the prevailing attitude suggests that many wealth creators, including the horror-show that Trump has tapped to run his Department of Labor, won’t notice that the malls in Libertopia are empty until two monthly payments after they’ve put the run on the last of the steadies clinging to the claim.

"They're always polite, they always upsell, they never take a vacation, they never show up late, there's never a slip-and-fall, or an age, sex, or race discrimination case."

"Millennials [excluding the hungriest of the young hungry guys, no doubt] like not seeing people, I've been inside restaurants where we've installed ordering kiosks ... and I've actually seen young people waiting in line to use the kiosk where there's a person [either old or toothless, no doubt] standing behind the counter, waiting on nobody."

And the machines won’t have to be concerned about their earned income tax credits because they’ll never need dentures (If you can endure just a few minutes of this interviewer's ass-licking routine):

Curious that you mention fast food automation, John. A neighbour told me that he recently popped into the local Mcdonald's for breakfast. They had replaced the counter staff with an order kiosk.

The population around here being older than average, customers were ignoring the "order here" sign and the kiosk and going directly to the counter where the manager stood to shoo them back into the electronic order line.

The only staffer you see, other than the manager/herdsman on watch duty, is the underling who shoves your bag across the counter when your number is called.

I've heard the (I hate to use the word "restaurant") is losing older customers in droves.

Apologies for continuing so off-topic: The world of button pushers and thumb bumpers is so amazing.

If I'd ever been a McDonalds customer, I wouldn't be one anymore. I haven't yet observed this development at any of the good-food-quickly chains whose gut-bombs I can tolerate. If I encounter it at any of them, I won't be back. I won't even stay. But before I leave, if I can find a person I'll him why I'm out.

A couple of years ago a staff kid at Home Depot came up to me while I was in line at the checkout and requested that I accompany him to another checkout "to save time". He then guided me over to the self-checkout. When I handed him the product he proceeded to begin instructing me on the procedure. I told him not to bother since, because I would never use it, I wasn't interested learning what buttons I would need to push. He then went into a condescending blather about how easy it was and that I shouldn't be afraid of technology. Old people, dear them, can be so apprehensive when confronted with something so new and revolutionary. That's what it took to get me to the point that I'd had enough of this exercise. I informed him that I'd never harboured such fears and that, if I had done, I'd probably overcome them sometime before he was born when I'd learned to program PLCs for control processes in manufacturing. I added that I didn't think that Home Depot could afford my rates and suggested that the company would be better off continuing to employ less expensive trained-to-task staff to perform the function. As I returned to the lineup the "technology" kid went in search of a more receptive candidate for introduction to his exciting new hi-tech world.

Since then I've had repeat experiences of this customer training approach at least a half dozen times at the same and other retailers.