The Swedes are Running Out of Rubbish to Recycle 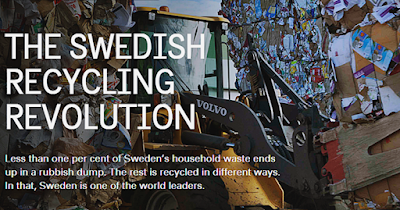 This is a bit mind-boggling. The people of Sweden have become such ardent recyclers that less than one per cent of their trash winds up in the landfill. They're so good at it that Sweden imports rubbish just so it can keep its recycling plants running. From The Independent:


While Europe is aiming for a 65 per cent recycling target by 2030, the UK may be about to fall even further behind its green neighbours.

Why are we sending waste to Sweden? Their system is so far ahead because of a culture of looking after the environment. Sweden was one of the first countries to implement a heavy tax on fossil fuels in 1991 and now sources almost half its electricity from renewables.

“Swedish people are quite keen on being out in nature and they are aware of what we need do on nature and environmental issues. We worked on communications for a long time to make people aware not to throw things outdoors so that we can recycle and reuse,” says Anna-Carin Gripwall, director of communications for Avfall Sverige, the Swedish Waste Management’s recycling association.

Over time, Sweden has implemented a cohesive national recycling policy so that even though private companies undertake most of the business of importing and burning waste, the energy goes into a national heating network to heat homes through the freezing Swedish winter. “That’s a key reason that we have this district network, so we can make use of the heating from the waste plants. In the southern part of Europe they don’t make use of the heating from the waste, it just goes out the chimney. Here we use it as a substitute for fossil fuel,” Ms Gripwell says.

A great story, Mound. Too bad their philosophy cannot be easily exported.


It speaks volumes that the Swedes have been able to treat burnable waste as a public asset integrated into a "national heating network." The very concept would be enough to cause Right wing minds to explode.

Anyong.....I seem to remember reading a similar article about Halifax, N. S. However, they are still not Canada's #1 Province when it comes to the least environmental pollution. Newfoundland & Labrador is.

Not so fast.
Waste to energy has it's problems.
How soon we forget.
http://midislandnews.com/waste-to-energy-who-wants-to-burn-metro-vancouvers-garbage

We do quite well here in the Regional District of Nanaimo.

The City of Ottawa has long burned trash to fuel snow melters. The snow is collected in large dump trucks that dump their loads into one of three recessed silos. That meant a switch from the old option of dumping the often contaminated snow into the river.

I'm not convinced the RDN is doing nearly as well as they claim, TB. Hell they won't even recycle glass any more. How long do you think a glass pickle jar lasts in the landfill? Forever, maybe. Try to put an old frying pan out for recycling. They won't take that either.

The RDN takes just about everthing at the landfill but not curbside pick up.
There are serious issues with burning waste we had many proposals and meetings in Nanaimo to discuss the subject.
I'm a 100% with you on glass; even the LCB stores recycle it.
The RDN contractor stopped accepting glass becasuse too many peopole put broken bottles in the garbage and hence caused too many injuries.

In London,ON we used to burn waste - human waste, garbage, everything. It was decided it was bad for the environment. So, instead of enhancing the technology regarding this, we just stopped. Now, after "normal" recycling, we put everything else, including mattresses and upholstered furniture, into landfill. Did I mention we're running out of landfill space?

I lived in a 300+ unit high-rise in Ontario during the '70s where the boiler was either constructed or adapted to use the garbage generated by the residents as a fuel to supplement the natural gas supply. According to the building manager, the garbage supplied over half of the requirements for the heating and hot water systems. A few years after I moved in management advised that the garbage could no longer be used because of regulatory requirements.

Anyong......there is a shortage of the kind of sand that is used to make glass....ocean sand is what is used. So how stupid is it not to recycle glass. But of course, people love to be in denial of anything they haven't heard of before but not according to Deutsche Welle regarding the sand problem.

What is "ocean sand" but the silica from processed coral. Spend time in the water with some parrot fish and you can watch beautiful, white sand being made.

Anyong....like everything else on earth...at the rate all resources are being used, your parrot fish story won`t reproduce fast enough.

I do think this should be considered to be done in all European countries, the way Sweden do, because it is not so innovative process, but definitely effective. Available information you can read here.

United Kingdom as well is showing big improvement in the last few years, still sending rubbish to Sweden for recycling can be switchblade knife with detrimental consequences. We should think how we can turn rubbish into energy, as I mentioned the future of rubbish in my blog.