A pretty nerve-wracking report from Scientific American concerning a guy Trump is eyeing to run the Food & Drug Administration. Brace yourself, especially if you're an American.


President-elect Donald Trump is weighing naming as Food and Drug Administration commissioner a staunch libertarian who has called for eliminating the agency’s mandate to determine whether new medicines are effective before approving them for sale.

“Let people start using them, at their own risk,” the candidate, Jim O’Neill, said in a 2014 speech to a biotech group.

O’Neill, has also called for paying organ donors and setting up libertarian societies at sea—and has said he was surprised to discover that FDA regulators actually enjoy science and like working to fight disease.

...Peter Thiel, the billionaire Trump donor who is helping shape the new administration, is pushing for the FDA appointment for O’Neill, his managing director at Mithril Capital Management.

O’Neill would be an unusual choice. He is not a physician, and lacks the strong science background that nearly all former commissioners have had in recent years.

...O’Neill has proposed that the FDA only require companies to prove drugs are safe before they are sold – not that they actually work.

O’Neill has also said that organ donors should be allowed to be paid. “There are plenty of healthy spare kidneys walking around, unused,” he said in a speech at a 2009 Seasteading conference.

And if that's not enough to unnerve ordinary Americans, this should do the trick: 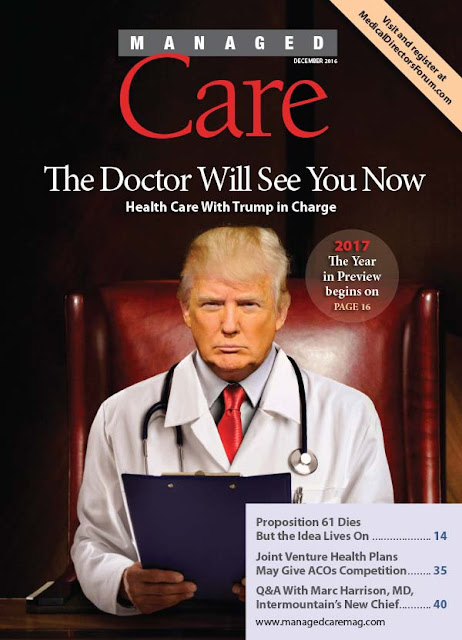 Trump has his work cut out for him if he's supposed to do a lousier job on healthcare reform than Obomba.

I hope you are an American posting about failures within the USA healthcare system?
Trump could possibly cut healthcare to 30 million that Obama gave it to.
A wonderful start; don't you think?

Who gives a shit how much Obama gets on the speaking circuit!
Who complained about GW Bush giving talks at hundreds of thousands $$ a pop telling like minded millionaires how to avoid , not just reduce, paying taxes!!

"Who gives a shit how much Obama gets on the speaking circuit!"

Responsible citizens opposed to pay-for-play corruption in politics and people who would rather be represented in government than corporations.

At least with Trump we get some kind of change. Or so the corporate 'fake news' media tells us!

And then there's Trump himself, who doesn't believe in anything except himself."

Can't wait to see the rest of the appointments.

Ben I fear that Robert Reich's take could be accurate. He has a greatly inflated notion of his country's strengths and almost no concept of its points of fragility.

Perhaps Trump will be America's "nation state stress test." The country might overdose on free market fundamentalism but, should that happen, the aftermath could be very ugly.

Would that be the reason Putin held his breath waiting for Trump to win? Indeed, this could be very hideous and extremely damaging to Canada.