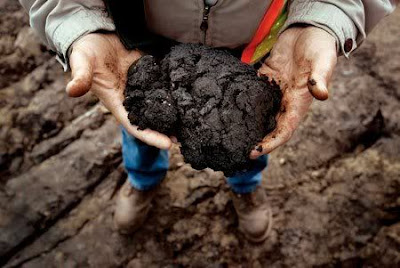 The Norse know a couple of things about oil - how to make money from oil and how to hold onto it. It's how their government amassed the world's largest sovereign wealth fund now worth a million kroner for every man, woman and child in the country. We, especially Alberta, might have done well to follow Norway's example but... spilled milk, I suppose.

Making money and holding onto it also entails getting out of deals when the time comes. And that time has come for Norse oil giant, StatOil, in Athabasca. The company has announced it'll take a 550-billion USD loss to sell off its assets in the Athabasca Tar Sands.

The international company, which has operations in 37 countries, with about 21,000 employees worldwide, said the decision was about reducing costs as well as cutting its greenhouse gas emissions.

"Today we announced @Statoil exit of oil sands which bends our cost and emission curves," said Bjørn Otto Sverdrup, a senior vice-president in charge of sustainability at Statoil, on Twitter. "Building resilience."

"Building Resilience" - is that Norse for getting out while the getting's good? Maybe, this time, Ottawa should be listening. Carbon Bubble anyone?

As for listening you might find Dan Greenford's take on his session with Marc Garneau enlightening.

..Our purpose was to discuss challenges Canada faces to meet its expressed climate targets. There are many arguments against the proposed Trans Mountain pipeline expansion and the building of other new pipelines to carry oil sands, but we believe one reason is enough — that new pipelines are directly at odds with a transition aligned with averting catastrophic climate change. The math is clear and simple — Canada doesn’t need new pipelines if we are to honour our climate policy commitments.

Garneau has said that the government did its climate homework and that its decisions were based on sound policy.

Earth scientist David Hughes has provided lucid analysis and has said with conviction: “Short of an economic collapse, it is difficult to see how Canada can realistically meet its Paris commitments in the 14 years remaining without rethinking its plans for oil and gas development.”

As for other arguments, there are too many to list exhaustively here. For starters, even if we intend to sell the heavy crude from the oilsands, the most likely outcome is that no one will buy it. New reserves were recently discovered in the Permian Basin three times larger than that of the Bakken Formation. The heavy crude from the oilsands is a marginal resource. It will not be sold in a carbon-constrained world. Prices will remain low indefinitely due to an adequate remaining supply of cheaper, more accessible resources. This says nothing of it being one of the most environmentally damaging forms of oil extraction. For all these reasons and more, including economic costs, it must be the first oil source left buried.

We relayed this to the minister and none of it really seemed to make it through. His response was “we’ll have to wait and see what happens”. When it comes to the health of our environment and our economy, a “wait and see” strategy is irresponsible. Whatever happened to the precautionary principle?

The new KM line will likely get killed in the courts (like Gateway) or perhaps on the ground like DAPL.
Even if Christie finagles another sleepwalk to the polls win this year. The momentum could eventually get the current line shut down too. Dilbit sinks, has an absurd environmental footprint and now, nobody wants it.
A prudent Alberta would quietly sell its sweet crude and gas and use the proceeds to clean up from ff and start green energy industries.

Should the tar sands return to economic viability then the product should be refined into a clean consumer product in Alberta. That way the jobs – and the environmental impact and risk – stay home where they belong.

If the BC NDP can hold firm on KM they might sweep the lower mainland and coast.

Jeez, I'd like to think you're right, NPoV. Unfortunately, Dix performance in the last runoff showed how hapless are the NDP in our province. They only seem to be the opposition because somebody has to fill the spot.

One way or another, Mound, it's a hard rain's a gonna fall for the oil industry.

And what about the mess and dislocation in the aftermath, Owen?

That hard rain will fall on everyone, Mound. It will be hard to find shelter.

Unless they give dilbit away which they almost do as the royalties are low;the future looks bad for the tarsands

Mound, Junior knows very well that tar sands are ganz kaputt.
He muddies the reality to stave bad news and defer the collapse of Alberta's (and Canadian) economy hoping for a softer landing in the future.
A..non

Justin Trudeau,Christy Clark and Rachel Notley are playing the long game.
They look to the USA pumping fracked oil at full speed; oil reserves that are expected to last about ten years.

Then it becomes interesting.
Will other conventional reserves be found( likely) and just how much alternative energy sources will be being used?

If these carbon based resources fail to fulfill world needs then these three politicians will hit the jackpot for their backers , not the environment.

BC has possibly the most to lose if all this speculation fails; Norm Farrell and now Laila Yuile have documented this in detail.

This is how it is with those we are supposed to trust!
All the leaders of Western 'democracies' say the same; we are doing our best to combat climate change.
Major international companies do it too.
They all speak from both sides of their mouths!