Showdown At the "DT Corral"? 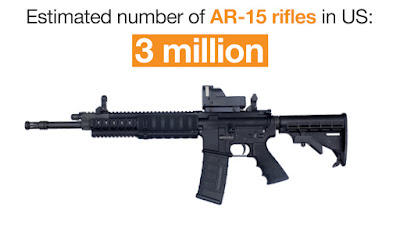 Should've seen this coming. BBC News reports that fears of a Trump presidency has some American liberals going for their guns.


Gun ownership has traditionally been associated with the right wing in America but the election of Donald Trump has prompted some left-wingers to join gun clubs - and even start preparing for the collapse of society.

"I really didn't expect to be thinking about purchasing a gun. It was something that my father did and I rolled my eyes at him."

...Many expected the election of Donald Trump, whose candidacy was backed by the National Rifle Association, to bring an end to the panic buying. Shares in gun manufacturers dropped by as much as 18% following his victory.

But instead FBI background checks for gun transactions soared to a new record for a single day - 185,713 - during the Black Friday sales on 25 November, according to gun control news site The Trace.

Some of this has been put down to gun retailers selling off stock at reduced prices, but there have also been reports of more "non-traditional" buyers, such as African Americans and other minorities, turning up at gun shops and shooting ranges.

Lara Smith, national spokesperson for the Liberal Gun Club, says her organisation has seen a "huge" rise in enquiries since November's election and a 10% increase in paid members.

Some of the new members are reluctant first-time gun owners, says Smith, concerned that isolated acts of aggression against minorities could escalate into something more violent and that a Trump administration will dismantle key constitutional rights, leading to a "more fascist rule than the US has ever had".