Food for Thought: Thoreau's "Walden" For the Anthropocene. 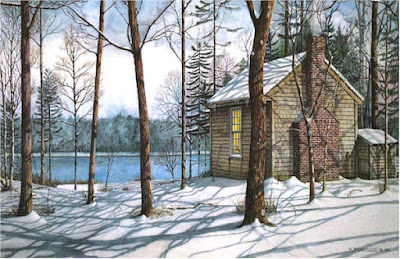 Duke law professor, Jedediah Purdy, calls it "This Profaned World." He refers to Earth in the Anthropocene epoch in an essay at the Australian Broadcast Corporation web site.

Purdy quests to find a Walden for the Anthropocene.


Henry David Thoreau's phrase, "In wildness is the preservation of the world," launched a thousand calendars, mugs, T-shirts and bumper stickers. For a long time, it seemed the perfect slogan for American environmentalism.

The movement sprang up to preserve the Adirondacks and Sierra Nevada, grew through public fights in the 1950s over Grand Canyon development, and then defined itself for decades by defending "wild" species like whale and bald eagles, and "wild" places like the Arctic National Wildlife Refuge.

Today the world looks very different. The defining environmental challenge is climate change. Among other things, climate change means there is no "wild" place, nowhere that human beings have not changed.

From the upper atmosphere to the deep sea, the planet's metabolism, its basic chemistry, is now something we have help to make. Species extinction, toxicity crises, and skyrocketing global resource use make the same point more vivid: we have run out of wild.

A better slogan for today might come from the modernist poet Wallace Stevens: "The imperfect is our only paradise."

...I've been wondering, though, whether we can't have a Thoreau for the Anthropocene, a Thoreau who is less interested in wilderness than in how to live with, relate to and value a world we have irrevocably changed, a world where nothing is really separate from us. I like this idea because the Anthropocene needs its own cultural history, its environmental texts. Whatever its limitations, Thoreau's writing contains some of the richest American reflection on humane living in a living world. It is a lot of baby to toss out with the pre-Anthropocene bathwater.

It's a great essay for you literary types or if you just want to ponder how we're going to live and communicate and socialize in this new Anthropocene.

A Thoreau for the Anthropocene Age? If that person were to bear any resemblance to the original one, Mound, I know a few jurisdictions (including the incoming American administration) that would likely label him or her An Enemy of the State.

No more walks in the wood:
The trees have all been cut
Down, and where once they stood
Not even a wagon rut
Appears along the path
Low brush is taking over.

No more walks in the wood;
This is the aftermath
Of afternoons in the clover
Fields where we once made love
Then wandered home together
Where the trees arched above,
Where we made our own weather
When branches were the sky.
Now they are gone for good,
And you, for ill, and I
Am only a passer-by.

We and the trees and the way
Back from the fields of play
Lasted as long as we could.
No more walks in the wood.