The Ghosts of Nuremberg 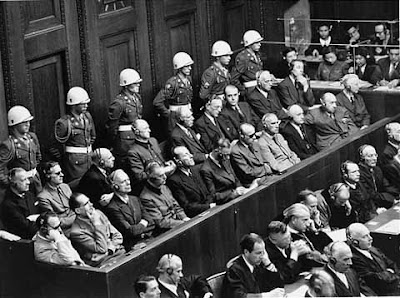 The world that emerged from WWII had pretty concrete views on war crimes. We abolished sovereign immunity. We put a lot of nasty people on trial for crimes against humanity and sent a good number of them to the gallows. No longer would the world sit by and tolerate their butchery.

We were never really as noble as we pretended to be. Realpolitik led us to look the other way. Genocide continued. Think Cambodia or Rwanda, Biafra or the Congo. But that was Asia and Africa, places that hardly mattered among polite company. It would be enough that we and our friends wouldn't resort to such barbarism.

Sadly, the ghosts of Nuremberg have returned and, once again, we're doing nothing.

Deutsche Welle's Rainer Sollich offers up the slaughter in Aleppo that will almost certainly spread to the rest of Syria as an example of the West's fecklessness. To Sollich the lesson is clear - war crimes now pay off.

The military triumph of the Assad regime is unstoppable as long as it can rely on its allies. As soon as all of Aleppo is under the control of the regime, Bashar al-Assad will almost certainly set his sights on the remaining rebel-held areas in the Idlib region. The war will go on, and claim many more victims. Who or what could still stop Assad?

It seems the answer is not the West, or the so-called "international community." The United Nations has completely failed, as departing Secretary General Ban Ki Moon has acknowledged. The world is standing by, doing nothing as people in Aleppo and the rest of the country are murdered. Diplomatic efforts continue to be made, but they are a cover for pure powerlessness. Nobody has come forward to aid Syria's civilians. And that is not likely to change under the administration of US President- Elect Donald Trump.

But, of course, that's Syria and we've been at odds with that place and the Assads for donkey's years. It's not like they're our ally or anything. Yet, when we look at Saudi Arabia and Israel that's just a distinction without a difference.

We, Canada included, have been allied with the real butchers of the Middle East, the Saudis. Thanks to the House of Saud and their friends in Ottawa, Canada has become the second largest arms trafficker to the region.

The Saudis have been bombing Houthi civilians in towns and cities in Yemen using American made cluster bombs. That's a war crime and it's a crime against humanity. The Americans have had their fill of these war crimes and the Brits are getting nervous about how this makes them look. The Trudeau government? Well, a deal's a deal.

We're on the record. The Saudis are our allies. Together we're fighting this ill-named War on Terror. Only these same Saudis and their cousins, the princes, emirs, and sheikhs of the Gulf States have both promoted and funded the most radical strain of Sunni Islam that inevitably manifests in murderous groups such as al Qaeda, al Nusra, ISIS and Boko Haram. Those Houthi rebels in Yemen? Their fighters are battling al Qaeda and ISIS forces.

Let's look at the record. The original "embassy bombings" - Salafist Sunni. The attack on the USS Cole - Salafist Sunni. The original World Trade Center parkade bombing - radical Sunni Islamists. The 9/11 attacks on the World Trade Center and the Pentagon - ditto, Sunni. al Qaeda, al Nusra, ISIS, Boko Haram - you guessed it - radical Sunni Islamists. Who provides funding and support to these outfits? I guess that would be our allies. Who funds the madrassas where this venomous strain of Islam is spread throughout the Muslim world? Yeah, our ally, Saudi Arabia.

At what point do we have to accept some measure of complicity in their handiwork for recognizing them as allies and supporting them with their armament needs? Sure Canada isn't selling them cluster bombs but we are delivering Canadian-made death wagons, the Saudis' democracy suppression weapon of choice.

What of Canada's fulsome and unquestioning support of Israel? When it comes to war crimes the made-in-Israel doctrine of Dahiyeh is first class. Rather than attack combattants, go after civilian populations and their essential infrastructure. It typically starts with a two to three day air campaign to destroy the water, sewer and power plants followed by the destruction of hospitals, schools and police stations before turning to what's left, residential neighbourhoods. It began as an experiment tested on the Beirut neighbourhood of the same name and the pattern has been repeated in Israel's last two campaigns against the Palestinian population of Gaza. Is it a war crime? Absolutely. Does Israel care? Not so long as it has its two holdout backers in the UN, the United States and Canada.

Rainer Sollich's point, as I get it, is that these war crimes happen because, by act or omission, we let them happen. Friend and foe alike repeatedly show us what they'll do if they know we'll do nothing.

The ghosts of Nuremberg are back. We didn't have to let that happen.

Horrors such as that in Aleppo always raise a cry of, "Do something!" Those who cry thus rarely have any real suggestions other than to send in our troops to add to the killing, to escalate the slaughter. Killing bad guys is always popular. Staying out of other peoples' civil wars tends not to be so popular.

You are right, Mound, that the arms trade and other support of bad actors such as the Saudis and Pakistanis is something that Western governments could do something about. I am always appalled when I see news clips from places where most people are going hungry with ragamuffin kids carrying military assault weapons. The cost of such weapons would certainly be better spent feeding people. Those who arm those kids definitely hope they pull the triggers and care little about who gets hurt.

For historical reference, Sam Colt happily sold his 45 to both the North and South during the US civil war. Arming both sides has a long tradition.

Who started* the Syrian 'regime change' events. The main blame goes there.

*If you think the Syrian graffiti kids started it... then who exploited that for their own purposes.

According to Sarah Chayes who wrote Thieves of State the so called Arab Spring was a response to corruption throughout the Middle East. She also said that Western governments and non-government sources often finance said corruption for their own ends.

I think if you look into it you'll find that sectarian demographics coupled with climate change impacts formed the trigger for the Syrian conflict. Severe drought and food shortages were exacerbated by an Alawite regime that decided that some Syrians, Alawite and Shia to be precise, should receive emergency food while the Sunni majority were left to fend for themselves, i.e. starve. Once ISIS became established in Iraq it was pushing on an open door for its forces to move into Syria through the Sunni Syrian territories.

Was this really part of the Arab Spring? I associate that unrest mainly with government corruption, unemployment, nepotism, food shortages, repression - a basket full of grievances that spanned a broad range of interest groups. To me, that was specific to North Africa: Tunisia, Egypt and, in a way, Libya.

Toby, Syria is an intractable problem for the West especially now that Russia has exploited the situation. In any event it would be beyond hypocritical for us to pick and choose among tyrants on the basis of whom we favoured and those we opposed. Despite the facile posturing that oozes from Washington and Ottawa, we do not have clean hands in the Middle East. We might not see it that way but the people of the region are under no illusions.

An example, after decades of propping up our Egyptian ally, Mubarak, we got onside with the Arab Spring but only after it was unstoppable. Then we undermined the only democratically elected government Egypt has known, Morsi and his Muslim Brotherhood, who, while far from ideal could still have anchored a road to democracy for the land of the Pharaohs. Instead, partly to placate Israel, we backed another military coup and a return to mass executions and repression. Do we imagine for one minute that our role hasn't been burned into the minds of the Arab people?

In the Middle East we have made ourselves Latter Day Crusaders from the days of Napoleon to T.E. Lawrence to Shah Pahlavi to this very day. It's farcical, unless you're a citizen of the Arab Street on the receiving end of the fallout from our follies in the Muslim world.

To conclude, my point is that we no longer have the regional dominance that we can continue to denounce one dictator while supporting other despots in the same region. How can we have any meaningful credibility on Assad when we openly support the generals in Cairo, the House of Saud, or Bibi Netanyahu?

The worst part of our rank hypocrisy is that it never seems to deliver any satisfactory outcome for our efforts. America and its subsidiaries steamrollered into the Muslim world with "all the King's horses and all the King's men" 15 years ago (longer if you go back to Desert Storm) and what have we achieved for our efforts, the lives taken wholesale on both sides and our treasuries squandered? Afghanistan stands testament to our clumsy stupidity and our arrogance bordering on hubris.

Oh well, maybe we'll do better in a shooting war with Russia.

The ghosts of Nuremberg never left. They were with us as we left no stone atop another in the bombing of Pyongyang in the Korean war. They were with the Americans as they practised their hideous butchery in Vietnam. They were there as CIA trainers, some of them ex-Nazis themselves, taught the stooges of our pet dictators how to torture properly, all over Latin America and Africa. They were there as we laid waste to Afghanistan, as our "sanctions" murdered 500,000 children in Iraq ("worth it" crowed Albright), as we bombed Baghdad and massacred Fallujah and got our Nazi-style freak on in Abu Ghraib.

Now suddenly we're shocked . . . SHOCKED! That city fighting in civil wars is bloody. Just like what the Americans are doing just a few miles away at the exact same time. Don't get me wrong--I'm fine with the Americans and Iraqi government forces and who all taking Mosul from ISIS, but the pretence that it's somehow any different from what the Syrian government and the Russians were doing in Aleppo is laughable even by modern propaganda standards--which makes it very laughable indeed.

Yeah, the stench of US hypocrisy is strong. As Micah Zenko of the Council on Foreign Relations noted: "Under Obama, US sold $112 billion in weapons to Saudi Arabia. 37 days left, he cancels sales to protest an airwar the US backed from day 1."

What gets me is the reporting about the war in Syria. The CBC, for example, says that the Syrian government and the Russians are bombing "rebel held" parts of Aleppo. We're sometimes told these "rebels" are US-backed. But we're rarely told of the atrocities these "rebels" have committed in Aleppo, and we're never told their identity. And for good reason - the "rebels" include al-Qaeda (aka Jabhat al-Nusra, aka Jabhat Fateh al-Sham).