She's an Expert On Corruption in Foreign Lands. Now She Sees It Taking Hold In Her American Homeland 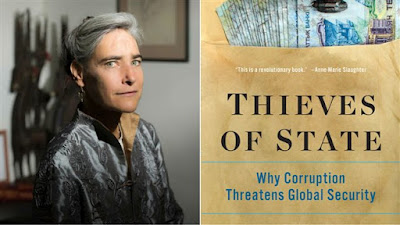 Sarah Chayes knows a thing or two about government corruption. The former award-winning NPR journalist, special advisor to the Chairman of the Joint Chiefs of Staff, development worker in Afghanistan and now a fellow with the
Carnegie Endowment for International Peace, has spent most of the past two decades in Europe and South Asia.

Returning to the United States, Chayes was struck by the degree to which corruption has spread through the US government.


For the past decade, I’ve worked on the issue of corruption around the world. In particular, I’ve spent a lot of time explaining that people who live in structurally corrupt political and economic systems are sometimes driven to extremes. I have always understood that the analysis was relevant in the United States — just maybe not how relevant.

In the past 10 years, populations have rejected “rigged systems” that had stood for decades. They have risen up in mass protests in Brazil, Guatemala, South Africa, and South Korea. They have overthrown their governments in open insurrections like the Arab Spring and Ukraine’s Maidan. Or they have fallen in behind self-proclaimed Robin Hoods such as Venezuela’s Hugo Chávez. Occasionally, they have joined violent religious movements like the Islamic State or Boko Haram.

With Trump’s election, the United States just joined this list.

It might make his voters uncomfortable to hear that they’ve behaved much as my former neighbors in Kandahar, Afghanistan, who re-embraced the Taliban in their disgust at the corruption of Hamid Karzai’s government.

...Networks that weave together public officials and business magnates (think the food or energy industries, pharmaceuticals, or Wall Street) have rewritten our legislation to serve their own interests. Institutions that have retained some independence, such as oversight bodies and courts, have been deliberately disabled — starved of operating funds or left understaffed. Practices that, while perhaps not technically illegal, clearly cross the line to the unethical, the inappropriate, or the objectively corrupt have been defended by those who cast themselves as bulwarks of reason and integrity.

These are moral issues. And the very laws we depend on to enforce what should be bedrock standards have sometimes undermined them. Do we reject corruption? Of course we do — just as we refuse to countenance torture. But then come the legal definitions. What counts as torture? How bad does it have to hurt? What do you mean by corruption? The head of an Egyptian business association once told me: “That’s part of the brilliance of corruption in Egypt; they make it legal!” The United States is going down the same road: The laws we hold so dear have narrowed the definition of corruption almost to the point of irrelevance.

..like the people of Mosul in Iraq or northern Nigeria, who traded intolerably corrupt regimes for Islamist crusaders who were worse, Americans will wake up in January under a system that is more corrupt than the one that fueled their rebellion. That is the irony of resorting to a wrecking ball to bring down a corrupt regime. Too often, the kleptocratic networks prove resilient, while those who revolted end up with crushed heads.

Already, President-elect Trump’s questionable affiliations and potential conflicts of interest — as genteel vocabulary would have it — are making headlines. The issue is not one of technical legality or poor vetting. His actions and associations are deliberate. While tweeting out distractions to disguise the fact, he will unleash a feeding frenzy. Our laws and institutions will be bent to the purposes of personal enrichment. Industry lobbyists will draft the bills. He will negotiate business deals with foreign counterparts, confusing his personal interests for the good of the nation. Agencies that try to hold the line will see their budgets slashed, their officials belittled in public. Law enforcement will be even more selective than it is today. The labor of human beings, the land, and what’s on it or under it will be converted to cash as efficiently as possible. And what can’t be converted will be bulldozed out of the way.


...Will we further relax our standards, shrugging our shoulders and referring to the letter of ever-changing laws? Or will we reach for a definition of corruption that is in line with common sense and rebuild our foundations upon that bedrock?

Our answer to that challenge will determine whether this is a crisis the United States survives and from which it emerges renewed — or whether we lurch into some more violent and damaging cataclysm.

She should spend a week or two in BC.
It could be a lifetime job.
BC Mary, RIP.

Yep. We like to think that our federal government isn't corrupt but that's not true. Modern corruption in the west is a two-stage process. It begins with legislative capture in which special interests insinuate themselves between the public and the representatives they elect to high office. One hallmark of legislative capture is inequality, the "trickle up" economy that Stiglitz and others have shown is largely legislated and has little to do with either market or merit forces. Another telltale of corruption once legislative capture is entrenched is the next phase, regulatory capture. This occurs when regulatory boards, supposedly entrusted with protecting the public interest, are taken over by appointees from the regulated industries. Legislative capture precedes regulatory capture. It is corrupted elected officials who see to it that regulatory boards are dominated by industry shills. In Canada we have the glaring example of the National Energy Board that Trudeau once vowed to clean out but that still remains. He knew it was corrupt before. He's done nothing to clean house. Ask yourself what happened?

It's interesting when someone maps out for you a step by step manual about how state government corruption is achieved. It makes it very real.

One of the most powerful lines in the article for me was "That's part of the brilliance of corruption in Egypt, they make it legal." "The United States is going down the same road" Canada too. I'm definitely sending away for her book. Thx. for posting.

I became aware of Chayes many years ago when she wrote a report warning that, with the Taliban run out of town, the "old ways" of Afghani men molesting young boys had returned. I emailed McClatchey's Jonathan Landay to find out what he could tell me about her. Landay has been running the Afghan hills since the Mujis were battling Soviet forces way back when. He told me that she knew as much about Afghanistan as just about any journalist and her reporting was rock solid.

There are several videos on Youtube with Sarah Chayes. Here she talks about her book, Thieves of State.

Anyong.....Oh My! Government Corruption is only just beginning now with the advent of Trump in the US? Somehow it doesn't ring true. In Canada Joey Smallwood comes to mind without hesitation.

Thanks for this, Mound. Sarah Chayes has a powerful argument. Yes, The Western world, including Canada, is full of corruption.

It does seem more corrupt, Toby. I hope it's not just that it's more transparent today although I don't think that's the case.