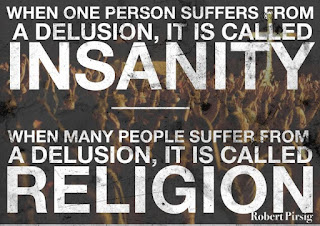 Where is the line between religious devotion and insanity? Believe it or not, that's before the courts now in a death penalty case.

In his book Under the Banner of Heaven: A Story of Violent Faith, journalist Jon Krakauer chronicled the case of Utah v. Lafferty, which addressed the 1984 killings of a woman and a child by two Mormon fundamentalists, Ron and Dan Lafferty. Over the last several decades, the question of Ron Lafferty’s mental health has played a key role in the case, as both sides have battled over his competency to stand trial.

The defense has argued that Ron is mentally ill and therefore should not be put to death. In interviews, Ron has claimed to be a prophet, endorsed hearing the voice of Christ, and expressed fears about “an evil homosexual spirit trying to invade his body through his anus.” Psychiatric experts have testified that Ron appeared to suffer from a psychotic illness, such as schizoaffective disorder.

The prosecution has sought to uphold his competency to stand trial, relating his bizarre ideas to religious practices worldwide. In the words of Dr. Noel Gardner, a psychiatrist who testified for the prosecution, “the majority of people in our country believe in God. Most people in our country say they pray to God. It’s a common experience. And while the labels that Mr. Lafferty uses are certainly unusual, the thought forms themselves are really very common…to all of us.”

A local news column from 2013 summed up the complexities of this ongoing case—“Where is the line between faith and delusion? Between malice and mental illness?”
Posted by The Mound of Sound at 12:30 PM

If only there were some place of treatment where we could put the violently religious and others so religious that they cannot fend for themselves in society.
. . . Actually, these days, if only there were places like that where we could put the violently and incompetently insane. The old system of asylums for everyone we felt like putting out of the way was not great, but the new system of just leaving everyone to fend for themselves kind of sucks too.


I recall when the BC NDP closed the asylums and left the patients to fend for themselves, PLG. We had some who took up residence in the parking garage of my office building. Others we would see roaming the halls of the courthouse in search of warmth and washrooms. Some were plainly incapable of handling life on the outside. In some cases that led to violence which saw them returned to another institution - prison.

I know it was done with the best of intentions but, in many cases, it only worsened their suffering. It's one of those problems that defy most solutions.

.. I've mentioned this book many times, to many people.. The Lafferty's murdered their brother's wife & child.. God told them too. But in many ways, the book, which is shocking & brilliantly researched is really about the complete fallacy of Mormonism.. which by the way, is the fastest growing religion in the USA. Quite likely The Morman 'invisible friend upstairs' is the most bizarre of all.. a complete fabrication by a Brooklyn lunatic who most certainly was completely unbalanced. As far as the local culture of Morman communities - they should leave coherent North Americans aghast.. The twisted underage sexual aspects, the crazy 'marriages' or promising of female children to 'Elders' with the most clout or magic underwear. The book simply stuns - but the failure of the legal system to deal simply with the facts, left me depressed at how this situation was allowed to spiral out of control.. Welcome to America - Land of the Free / Home of the Brave ? I think not.. So much distorted thinking, false 'patriotism' - rampant political corruption & obstruction - No wonder Stephen Harper, Ray Novak, Jason Kenney et al borrowed so much of their process & dogma from American politics - Welcome to.. not the Rapture - but to the Rupture .. the gutting of reason, honesty, responsibility.. and reality

If it hadn't been a time when government was being generally rolled back, maybe they could have come up with some more in-between solutions as with health- and elder-care: Some people need to be in intensive care, some people are better off in long term beds, some people need to be in full-on old folks homes, some people in "assisted living" spaces, some just need someone to come by their place once a week and take care of a few things.
A lot of people with mental illnesses would probably be OK in some kind of subsidized housing with someone who came by and handled some of the stuff they couldn't, made sure they were taking their meds or whatever. Others maybe need to be in an institution where their needs are taken care of more completely, but there's no real reason they shouldn't go out to the shops if they feel like, maybe with some kind of tracker so if they wander off and get lost you can find them. And then, for those few that really can't cope or really are dangerous, we do need real asylums--they just shouldn't be one size fits all.
I think the people who were originally talking about the abuses of the asylum system were not intending to just throw all the mentally ill people out on their own, in a land of reduced social safety nets and no cheap housing yet.

Mormonism is pretty dashed bizarre, and it's clear that the guy who started it was part nuts, I believe part druggie, and part con-man. But I'd have to argue that the cake is taken by Scientology when it comes to whacked out con-job religions.

I know it was done with the best of intentions

Sorry, you have too much faith in your fellow human and their rationalizations...
methinks it was the harbinger of the currently labeled 'austerity'
- it was done to save money (penny wise pound foolish politicians)

Many religious icons have their beginnings rooted in the manipulation of sexual desire to imprison the and manipulate the congregation.
I would suggest that all evangelistic religions directly or indirectly promote the domination and sexual exploitation of women in a fetish desire to please their god and themselves..

The asyla were closed as a result of The Anti-Psychiatry Movement being seized upon by penny pinching governments.

It's actually a fascinating though tragic story.