Okay, Is This Plain Enough for You?


The irony is how many people use our new harsh winters as proof that the whole global warming thing is a hoax. Even the most ignorant among them know enough to parrot "Snowmageddon" and "Polar Vortex" at the drop of a climate scientist's hat.

What the scientists now know, however, is that these winter cold snaps and most other extreme weather events including summer droughts and floods are directly linked to the extreme warming conditions underway in the Arctic.

The northern ice cap has been shrinking since the 1970s, with global warming driving the loss of about three-quarters of its volume so far. But the recent heat in the Arctic has shocked scientists, with temperatures 33C above average in parts of the Russian Arctic and 20C higher in some other places.

In November, ice levels hit a record low, and we are now in “uncharted territory”, said Prof Jennifer Francis, an Arctic climate expert at Rutgers University in the US, who first became interested in the region when she sailed through it on a round-the-world trip in the 1980s.

“These rapid changes in the Arctic are affecting weather patterns where you live right now,” she said. “In the past you have had natural variations like El Niño, but they have never happened before in combination with this very warm Arctic, so it is a whole new ball game.


“It is inconceivable that this ridiculously warm Arctic would not have an impact on weather patterns in the middle latitudes further south, where so many people live.

“It’s safe to say [the hot Arctic] is going to have a big impact, but it’s hard to say exactly how big right now. But we are going to have a lot of very interesting weather – we’re not going to get around that one.”

So, stick your head between your legs and kiss your ass goodbye. Maybe, maybe not, maybe not just yet.

There has been a great deal of research coming in over the past couple of months about what climate scientists are calling the "climate emergency" underway in the Arctic.

In late November, the Stockholm Environmental Institute released its Arctic Resilience Report that concluded Arctic warming may have already resulted in the crossing of 19 climate change "tipping points." Why do tipping points matter? Because they herald a point of departure from which there may be no return. If you haven't read it, do read this report. It's that important.

Last week, the US National Oceanographic and Atmospheric Agency, NOAA, released its Arctic Report Card 2016. Here's what one of the authors had to say:

"When it started, you kind of had to listen closely because the Arctic was whispering change," said Perovich, who works at Dartmouth College's Thayer School of Engineering in New Hampshire.

"Now it is not whispering anymore. It is speaking change. It is shouting change."

This isn't voodoo, it's not magic. This is basic high school physics. Even a grade school drama teacher should be able to get this.

As the world warms so too does the Arctic. Only in the far north something different, "extra" happens. Think of the Arctic as a big mirror. All that ice and snow is very reflective. Around 80% of the sunshine that hits the surface is reflected back toward space.

As the air warms it has a special effect in the Arctic. Sea ice begins to melt faster during the summer and is slower to rebuild in the winter. That leaves more sea water exposed to the sun for longer periods. While the ice reflects 80% of solar energy, the dark green sea water absorbs 80% of the solar radiation. The mirror effect wanes as the ocean grows warmer.

The exposed sea water releases some of that heat energy to the atmosphere. The warmer Arctic air in turn causes snow melt and the thawing of the tundra eventually exposing the methane rich permafrost beneath.

The warmer, moister Arctic atmosphere energizes the Polar Jet Stream that creates an unusual effect of Rossby Waves. The jet stream plunges deep into the south drawing Arctic air with it, the Polar Vortex, while other waves draw warm air into the far north from the south. That's why in February, a few years ago, Atlanta, Georgia was brought to an icy halt while a village in northern Alaska basked in 62F warmth. Go figure, eh?

Here's a graphic that shows what's going on right now: 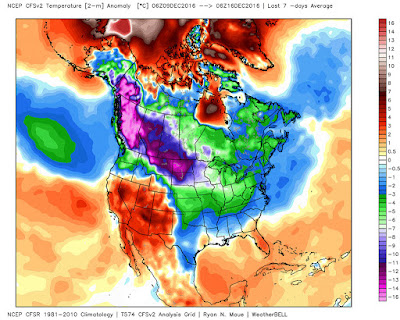 See all that dark reddish part at the top where it looks like the Earth is on fire? That's the Arctic right now. They're in the middle of Arctic winter when the sun doesn't shine - at all. In other words, there's no solar energy driving that heatwave.  Just sayin'.

Fortunately we have governments, federal and provincial, that we entrust to do what's necessary to respond to what the scientists are calling a "climate emergency" in the far north. So how are they doing?

Well, the Dauphin has the premiers in a tizzy over the idea of a wholly gestural carbon tax. Yessir, ten Canadian dollars a ton starting in 2018 going up, eventually, to a staggering fifty dollars a ton. That should make a big difference to this looming Arctic catastrophe, right? No, it won't make a difference? Nothing at all? Oh, oh dear.

Besides, Justin is sort of occupied right now with more important things. He wants to get an extra million barrels a day of dilbit off to foreign markets because in his Orwellian thinking more high carbon fossil fuels is the key to Canada's climate friendly future.

The bottom line. They're not going to do a damned thing about this. They won't even bring it up in conversation. They've got other plans even if what they've got in mind only makes this looming catastrophe that much worse.

One of the things that frustrates but doesn't surprise me, Mound, is that whenever Canadian and American news even use the term 'polar vortex,' they do so with absolutely no context. They use a tone to suggest that its pushing down far beyond its usual domain is a phenomenon with no significance except that it brings us frigid temperatures.

Would that they were at least honest about its frightening implications.


The media is no longer capable of conveying explanation or analysis, Lorne. News outlets, especially from the broadcast media, have been gutted, hollowed out.

I recently "cut the cable" after I realized that even information programming, especially news content, had become hopelessly superficial and even misleading. I thought I would miss it. I got that wrong.

i was just browsing along and came upon your blog. just wanted to say good blog and this article really helped me. flood restoration