The Anthropocene, Think of It This Way 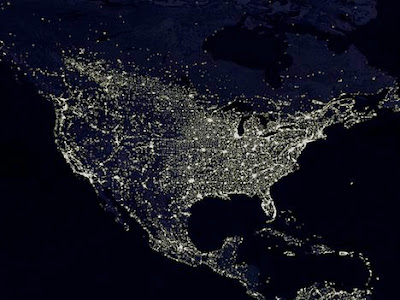 Astrobiologist David Grinspoon describes the Anthropocene, Earth's new geological epoch this way: "We're at the controls of planet Earth, but we're not in control."

True enough. We, mankind, are in the driver's seat and we have the pedal to the metal only no one has taken the wheel.

Gazing over the countless transformations in Earth’s multibillion-year history, I am struck by the unique strangeness of the present moment. We suddenly find ourselves sort of running a planet — a role we never anticipated or sought — without knowing how it should be done. We’re at the controls, but we’re not in control.

The scientific community is now converging on the idea that we have entered a new phase, or epoch, of Earth history — one in which the net activity of humans has become a powerful agent of geological change, equal to the other great forces of nature that build mountains and shape continents and species. The proposed name for this new epoch is the "Anthropocene" or the age of humanity. Many species have changed the planet, like the cyanobacteria that long ago pumped oxygen — terribly poisonous for most life at the time — into the atmosphere. But there has never before been a geological force aware of its own influence. We are witnessing something unprecedented and still completely unpredictable: the advent of self-aware geological change.

It’s a challenging moment for human civilization. The great restless cleverness of our species has gotten us into a tough spot. Our collective actions threaten the well-being of many of our fellow humans, not to mention vast numbers of our more distant biological relatives. Our very survival may be threatened. Paradoxically this comes at a time, and even largely as a result, of unparalleled advancement in our scientific and technological prowess. But if we’re so great at figuring things out and inventing solutions to problems, how come we’re in this mess? Part of the reason we are, so far, stumbling through this transition is that we have not yet seen it clearly for what it is. Our fundamental Anthropocene dilemma is that we have achieved global impact but have no mechanisms for global self-control.

...Before we were modern humans we were hominids who were nearly wiped out by climate change but survived by constructing new material and social technologies and finding new ways to live. ...We’ve bounced back a few times from the edge of extinction, and ultimately thrived due to our abilities to communicate, work collectively, adapt creatively to changing environments, and solve problems through technological and social innovation.

Now we need to do so again.

...Our obligation now is to move beyond lamenting the job we’ve done as reluctant, clumsy, incompetent planet-shapers. We have to face the fact that we’ve become a planetary force, and figure out how to be a better one. A planetary view of the human journey suggests that we are not stuck, just disoriented, not evil, just confused, struggling to find our way in a world increasingly of our own making. We’ve been building an expanding, rapidly changing civilization on a finite world with no long-term plan. Our challenge is to acknowledge the predicament we’re in, and not to succumb to toxic fatalism. Our most valuable resources — creativity, communication, invention and reinvention — are in fact unlimited.

If we make it through the next few centuries it will be because we’ve honed our survival skills and adapted them to work on a planetary scale. Once we achieve that, we’ll have done much more than ensure our own persistence against shortsighted self-induced challenges. We will have unleashed the power of reason and foresight in permanent defense of Earth’s biosphere.

In tragedy, hubris is the cause of the protagonist's downfall, Mound. Life now clearly imitates art.

Buried in Grinspoon's message, Lorne, is the idea that we have to approach this challenge of "steering" the planet collectively, as a global civilization. Just reaching that degree of consensus, coordination and cooperation will be an achievement perhaps greater than anything in the recorded history of our species. Imagine humanity speaking with one voice, all nations concurring. That's as alien to us as life on other planets.

A shift of that dimension will inevitably open other challenges that require solutions if we're to succeed on anthropogenic climate change. That will require collaboration and, there's no other word for it, sharing by those that have the most with those that have the least. How does an individual or a community or a nation substitute selflessness for selfishness, the public good in lieu of private interest? In the 12,000 year history of human civilization that type of collaborative organization is unknown and it may be unnatural to our species.

Anyong.....I agree with your comment Mound. The need to be a billionaire is so first and foremost in the minds of most people they haven't heard of the word "sustainability". Since J. Trudeau has a house next door to Donald Trump in Florida, I bet they have a great discussion over Christmas dinner regarding your topic.