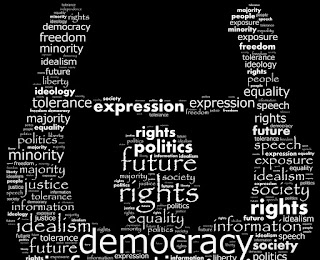 Throughout the western world, the public embrace of liberal democracy is growing weaker, more distanced. Like many of these fractured paradigms today, there's a distinct generational aspect at play. Put simply, fewer young people today support liberal democracy. It's still a minority who discount liberal democracy but the number seems to be growing.

Stanford historian, Francis Fukuyama believes that the public is becoming detached from their failing democratic institutions.

The U.S. has been the paradigm example of a large democracy in the post-WWII world, but it shows signs of wear and decay—as with some other larger-scale democracies. Fukuyama complains of “vetocracy,” not only in the U.S., but also other countries such as Greece, India and Ukraine. The idea is that power in western democracies has been “captured by elites” who can veto anything which crosses their interests; and it will take some shock to the system to get needed reforms.

Runciman emphasizes that the pace of technological change is throwing up problems more quickly than democratic politics can come to terms with them. I suspect that much the same could be said about the pace of change thrown up by globalization. Runicman claims that democracy is better than alternative systems in eventually dealing with major system-threatening problems, that it is better in self-correction. But what is happening now is that “the bad news doesn't reach us in time.” He warns against the temptation to by-pass politics through the use of technology. He sees it as problematic that in the last 25 years there has been a technological revolution but no related political crisis, as needed to make adjustments and institute reforms. In a political crisis, democracy will “kick the bums out,” and he emphasizes the importance of this sort of negative result of democratic political processes. The point is that the problems, say those generating economic inequality, come too fast to be dealt with by proper political processes. In some contrast Fukuyama complains that "identity politics” has substituted for traditional focus on economic issues on the left.

Mr. Mounk, a lecturer in government at Harvard, has spent the past few years challenging one of the bedrock assumptions of Western politics: that once a country becomes a liberal democracy, it will stay that way.

His research suggests something quite different: that liberal democracies around the world may be at serious risk of decline.

Mounk began by looking at the spread of populism in Europe.

A populist backlash was rising. But was that just a new kind of politics, or a symptom of something deeper?

To answer that question, Mr. Mounk teamed up with Roberto Stefan Foa, a political scientist at the University of Melbourne in Australia. They have since gathered and crunched data on the strength of liberal democracies.

Their conclusion, to be published in the January issue of the Journal of Democracy, is that democracies are not as secure as people may think. Right now, Mr. Mounk said in an interview, “the warning signs are flashing red.”

...since 2005, Freedom House’s index has shown a decline in global freedom each year. Is that a statistical anomaly, a result of a few random events in a relatively short period of time? Or does it indicate a meaningful pattern?

Mr. Mounk and Mr. Foa developed a three-factor formula to answer that question. Mr. Mounk thinks of it as an early-warning system, and it works something like a medical test: a way to detect that a democracy is ill before it develops full-blown symptoms.

The first factor was public support: How important do citizens think it is for their country to remain democratic? The second was public openness to nondemocratic forms of government, such as military rule. And the third factor was whether “antisystem parties and movements” — political parties and other major players whose core message is that the current system is illegitimate — were gaining support.

If support for democracy was falling while the other two measures were rising, the researchers marked that country “deconsolidating.” And they found that deconsolidation was the political equivalent of a low-grade fever that arrives the day before a full-blown case of the flu.

Mounk and Foa looked at two countries that embraced liberal democracy initially but almost as quickly turned away, Venezuela and Poland.

According to the Mounk-Foa early-warning system, signs of democratic deconsolidation in the United States and many other liberal democracies are now similar to those in Venezuela before its crisis.

Across numerous countries, including Australia, Britain, the Netherlands, New Zealand, Sweden and the United States, the percentage of people who say it is “essential” to live in a democracy has plummeted, and it is especially low among younger generations.

It's apparent that we take liberal democracy in Canada for granted at our peril. I'm convinced that we need a democratic restoration in Canada, a return to truly progressive democracy, the sort that builds social cohesion and a robust and broad-based middle class.

This isn't going to happen when we're told we're a post-national state; not a country at all but some Balkanized gaggle of regions united by a matrix of stitched-together trade deals.

Part of it is our neoliberal rejection of posterity. I addressed this in 2009.

...the genetic flaw in Western society, particularly North American society, the missing gene that pretty much dooms us all, is the absence of posterity in our planning.

Posterity doesn't fit into our economic model of production and consumption because it creates a fetter on both. We have lost our understanding of the importance of posterity to our society, to our country. We no longer plan today for generations to come far in the future. We no longer look much beyond the next electoral cycle.

Protecting posterity is an act of collective consciousness and will. It is acknowledging that we're entitled to our fair share and no more. We can't have it all without depriving future generations of their fair share.
To try to understand the idea of "fair share" imagine if our great, great, great grandparents had followed our path.

Imagine if our ancestors had two things - the ability to consume everything they could get their hands on and a blind indifference to the day when it was our turn to populate this country. Imagine if two or three generations had gone on a rapacious binge gobbling up the world's resources; going into serious deficit on renewables (emptying the oceans, logging off the forests, transforming farmland into desert) and fouling the environment. Then consider how their depredations might impact on your life today. I think that's beyond the imagination of all but the best science fiction writers but that's of no real matter. It's enough in any event to make the case for posterity and the concept of "fair share."

What is liberal democracy absent sovereignty, especially when national sovereignty is recklessly ceded to the corporate sector when inking free trade deals?

Put simply, Mound: Any society which can't nurture and support its young has a very dim future.


Even Edmund Burke would rebuke us for our selfishness and wanton appetites, Owen.

As Pogo remarked "We have seen the enemy and it is us '. We have not had democracies for long, there are lots of undemocratic rough edges to our democracies and not enough of us care.

Greek democracy, for the oligopoly only, was soon crushed. Six nations governance was seen as a model and they were crushed. Military coups, natural and societal disasters and invasions have moved countries from one column to another.

In our own smug was we think of Western democracy as the norm, although it has existed for only a tiny fraction of time. During that short period, true democracy was seldom practiced: as a woman, a minority or first nations person . We still have senates, judges, cabinets ,and electoral colleges whose job it is to keep power away from the plebes while .

In almost every country, the majority does not vote. A quarter of the electorate votes social democrat and the other quarter votes authoritarian ( with a range of strength of opinion inside both camps ).

I see few people who believe in true democracy and are willing to promote it. This is another problem that can be easily understood but solutions are more difficult.