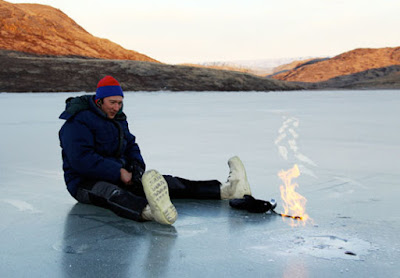 If you're in your 30s, maybe even in your 40s, you might be wondering what your odds are on whether you make it to die of old age. What are the odds your life will be prematurely ended by some sort of environmental calamity or some knock-on disaster such as a major war?

Look at it this way. Think of our global civilization as a rubber band, a band that's been stretched way too much and must be nearing its breaking point. That's a pretty apt metaphor for humanity today. We are at about 7.5 billion in numbers and headed to 9 billion, perhaps more. In the process we're consuming the Earth's natural resources at 1.7 times the replenishment rate and that's worsening with every passing year. That's how we're stretching the rubber band. We're at, probably long past, the point of inelasticity and we know how that ends - abruptly.

A new report out, seems there's at least one every week. This time it's atmospheric methane loading.

Emissions of the powerful greenhouse gas methane have surged in the past decade, threatening to thwart global attempts to combat climate change.

Scientists have been surprised by the surge, which began just over 10 years ago in 2007 and then was boosted even further in 2014 and 2015. Concentrations of methane in the atmosphere over those two years alone rose by more than 20 parts per billion, bringing the total to 1,830ppb.

At least a third of methane comes from the exploitation of fossil fuels, including fracking and oil drilling and some coal mining, where methane is viewed as a waste gas and is frequently allowed to escape or, in some cases, flared off, which is less harmful.

Unlike carbon dioxide emissions, however, which have been tracked in various ways since the 1950s, emissions of methane are poorly understood and could represent a threat that scientists have still not accounted for.

For instance, the melting of the Arctic tundra releases methane as the vegetation underneath is gradually and sometimes suddenly exposed. This has been regarded by scientists as a potential “tipping point” whereby warming of the Arctic leads to greater releases of methane, therefore greater warming, in a runaway and uncontrollable cycle.

This summer we learned that scientists have been underestimating the escape of much of the polar methane entering our atmosphere.

“Virtually all the climate models assume there’s no or very little emission of methane when the ground is frozen,” [Walter Oechel of San Diego State University] says. “That assumption is incorrect.”

The authors say the water trapped in the soil doesn’t freeze completely at 0°C. The top layer of the ground – known as the active layer – thaws in the summer and refreezes in the winter, and it experiences a kind of sandwiching effect as it freezes.

When temperatures are around 0°C (called “the zero curtain”) the top and bottom of the active layer begin to freeze, but the middle remains insulated. Micro-organisms in this unfrozen layer continue to break down organic matter and emit methane many months into the Arctic winter.

Methane has a shorter shelf life than CO2. It degrades more rapidly. Still it's 84 times more potent than CO2 over its first 20 years. Today it accounts for about 25% of overall man made global warming.

Unfortunately, especially for you nearing middle age, we're still supporting governments that support ever more greenhouse gas emissions while saying that they don't. And, yes, I mean the Trudeau government and the governments of Saskatchewan, Alberta and British Columbia. It's your life they're messing with.
Posted by The Mound of Sound at 10:26 AM

Email ThisBlogThis!Share to TwitterShare to FacebookShare to Pinterest
Labels: methane

Still, most people believe that natural gas is clean. They believe that dams are clean. I don't know how to explain to people that there is no free lunch; that everything has a trade off. To some degree I've been aware of this stuff for 50 years; most people simply won't listen. Those of us who know that there is a problem are simply flapping our jaws in the breeze. There won't be a serious public awakening until Mother Nature throws a really big one at us such as a Jupiter sized hurricane, a 20 metre rise of sea level or air so fouled that we have to carry oxygen canisters. Even at that many will just believe it to be God's will.

NPoV, thanks for the link. I found the writer's comments a bit abstract, save for the brief reference to overthrowing the government, an idea that wasn't developed. He likewise stopped well short of calling for a massive campaign of civil disobedience. Yet can anything short of that possibly forestall the worst? I couldn't convince my neighbours to reduce their fossil fuel consumption by 30% much less persuade them to curb their standard of living by 40%, perhaps more. We have a sense that we're entitled to these things, at least until every other last individual has cut back and then, maybe.

We want solutions that are effortless and demand no significant sacrifice. Look at the decided lack of support for upping the price of a tankful of SUV juice by five or six bucks.

I share your pessimism, Toby. Wish I didn't. At an intellectual level there's some consensus on what is necessary yet on a societal level there's really no appetite for it. Ours won't be the first society brought down by this paradox.

Thanks for providing recent updates regarding the concern, I look forward to read more. water damage restoration tampa