Here's One You Might Not Have Heard Of - the "Technosphere" 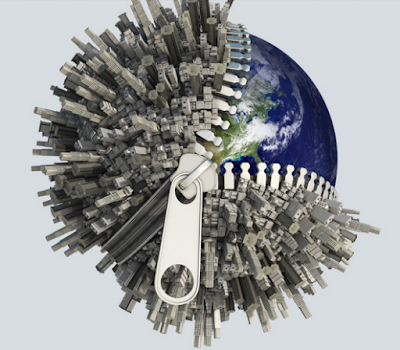 Think of it as everything man has built on Earth that's still standing. That includes the pyramids and everything older provided it's still around.

Now I'm going to throw out a number that's pretty hard to digest - thirty - trillion - tons. That's the estimated weight of the stuff we've built. Those pyramids, sure, but also the Trump Tower, all our roads and houses and bridges and airports, your car, your kid's bike, everything manmade.

Technosphere is a new term and according to the study published in journal The Anthropocene Review, it comprises of all the human-made structures including houses, factories and farms to airplanes, rockets, computer systems, tablets, smartphones and CDs, to the waste in landfills and spoil heaps that have been built to keep humans alive.

Humans have been having a huge impact on the planet through their activities and that’s where the Anthropocene concept has its roots in. It is an epoch that highlights the impact humans have made to the planet and it provides an understanding of how we have greatly changed the planet ever since our species started dominating.

Technosphere has its roots in the biosphere, but over the years it has gained so much of ‘weight’ and development that it has become a phenomenon of its own. Further, it is having a parasitic effect on the biosphere – like all human activities have on our planet.

Professor Mark Williams at the University of Leicester says “Compared with the biosphere, though, it is remarkably poor at recycling its own materials, as our burgeoning landfill sites show. This might be a barrier to its further success — or halt it altogether.”

According to Wiki, the average human body weight is just over 80 kilos which adds an extra 600-billion kilos of insatiable, voracious consumers all on its own. Maybe Elon Musk is right. Maybe we should get ourselves a new planet.
Posted by The Mound of Sound at 10:52 AM

Christ no!! We're already proving ourselves to be planet killers. It's probably best we keep the number to one.

The reckoning will come, Mound, far sooner, I suspect, than many care to contemplate. Each of our creations, of course, exact a huge toll environmentally, much of which is winding up in our own bodies from the release and ingestion of the various toxins released from them. Our addiction to baubles is costing each of us far more than most realize.

Anyong....Continued growth in population that hasn't had past life upon earth would no doubt be increasing weight upon the world at an enormous amount than anything else and is the cause of everything else that is detrimental to earth and its atmosphere....biosphere.
The Upside of Down by Thomas Homer-Dixon draws upon that very thing. It is the increase in population that has caused the most destruction upon earth since Roman times. Population increase was Roman's demise.

-In 1950, there were about two poor people for every rich person on Earth; today there are about four; in 2025, there will be nearly six.
- Three large spoonfuls of crude oil contain about the same amount of energy as eight hours of human manual labor. When we fill our car with gas, we're pouring into the tank the energy equivalent of about two years of human manual labor.
- Over the past twenty years, warming of the Arctic ocean has been eight times faster than it was over the past hundred years. All of this is putting our earth in peril.
If we were to stop having more than two children tomorrow in countries like India, China, and the Middle East, it would take many, many years before the world would feel any relief. I get it, you get and your commentators get it. The frustrating question is, why don't greedy people, politicians and religious yangbans (elites) understand this? This is so very sad.