Think Of It As "Direct Deposit"


Indian cities have a hellacious smog problem, sort of like Beijing only worse. So they've come up with an idea to clear up that smog - put it up into the atmosphere.

The idea is to use surplus jet engines. Get those running (on fossil fuel, of course) and then have them suck up the smog through their intakes and propel it skyward in their exhaust (along with the emissions from the spent jet fuel). 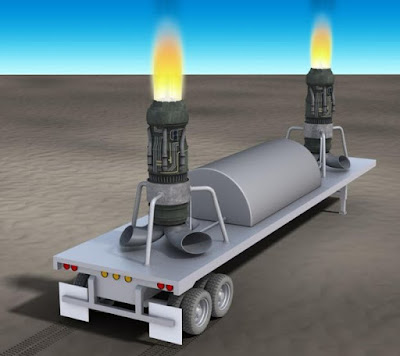 It all sounds good in theory, sort of, until you start asking questions about how many of these engines would be required to make any difference, how much fuel would be used, what would be the additional emissions load, who thought of this harebrained idea?
Posted by The Mound of Sound at 5:16 PM

That reminds me of the catalytic converter in a car exhaust system. In stead of cleaning up the problem, move it out of sight.


As an aside, did you notice that Paris is going to ban diesel cars by 2020? https://www.theguardian.com/world/2014/dec/07/paris-mayor-hidalgo-plans-ban-diesel-cars-french-capital-2020

I saw the reports about Paris and other cities banning diesel cars.

As for the jet "chimney" idea it addresses the symptom by adding even more fossil emissions to try to shift the problem elsewhere. What it tells me is how desperate they are to find some way of coping with a problem that is as intractable as it is dangerous.

That reminds me that the catalytic converter ... actually works extremely well in gasoline engines by converting toxic components in exhaust gases to harmless ones. Little knowledge is a very dangerous thing.

The "intractable" problem mentioned by Mound has a name - overpopulation. Indians have no balls (or perhaps too much of them) to deal with it.
A..non

The smog problem your reference actually has a name:
ABC... Atmospheric Brown Cloud.
Some are worse than others but ABCs hang over most Asian cities and pretty much all of the Indian subcontinent (where is is know as the Asian Brown Cloud).

The 'brown' is more about particulate than CO2. ABCs are killing the locals but ameliorating GW. (Like a huge volcano effect.) Some speculate that it could be as significant as 1 degree difference (cooler). We all know what 1 degree can do.

Burning ff (jet engines are the worst I believe) to route the pollution is obviously a mug's game as you point out. But moving (some already happening) particulate from the lower to the upper atmosphere could be a short term win in 'global roulette'. (Planetary Russian Roulette)

We'd still need a massive low-carbon planting exercise to coat the earth in carbon capturing foliage and stop virtually any CO2-producing use of ff. But it might buy us a decade or two once the world wakes up.

Kim Stanley Robinson wrote a excellent sf Climate Change Trilogy https://en.wikipedia.org/wiki/Forty_Signs_of_Rain
where he speculates on geo-engineering projects to save us all.

We should all be searching for the positive 'Black Swans' that might save us.

I'm unconvinced that this arrangement can actually propel the smog to any meaningful altitude. Surely the idea has to be to move that smog to a sufficient height that winds can carry it beyond the population centre. It strikes me that you would need reliable prevailing winds and an enormous array of surplus jet engines burning a commensurately enormous amount of JP4 to clear an urban area, at least to any medically significant degree.