When the Skies Open 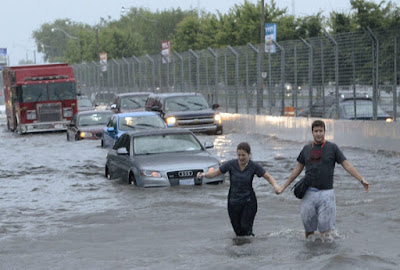 Living in the rainiest part of Canada, the legendary "wet coast," one tends to understand rain as others sometimes might not.

Out here we are steeped in the high winds and heavy rains that blow in from the Pacific. But the situation has been changing in recent years. The rains have been getting heavier, the winds seemingly stronger. Rains that wake you up in the middle of the night from a dead sleep. Happens a lot lately. Winds so strong and turbulent that the rainfall switches direction before your eyes and sometimes seems almost horizontal.

A few years ago we received this Biblical deluge. It started as abruptly as it finished, no more than 18-minutes, like a tap turning on and off. No rain, rain, no rain. Yet, in that brief interval, we received so much rain that it produced this:

Here's the thing. This is early onset stuff. We're just getting started.

When the skies open up and deluge an area, the results can be catastrophic, with roads washed out and homes destroyed by the resulting flash floods. Such extreme downpours are already occurring more often across the US, but a new study finds that as global temperatures rise, storms could dump considerably more rain and skyrocket in frequency.

The study, in the journal Nature Climate Change, suggests that storms that now occur about once a season could happen five times a season by the century’s end, a 400% increase.

And when such storms do occur, they could produce up to 70% more rain. That means that an intense thunderstorm that would today drop about 5cm (2 inches) of rain would drop 9cm in the future.

How much worse will it get? That depends on a number of factors from how quickly we can decarbonize our societies and our economies to how well we manage upgrading and replacing essential infrastructure such as storm sewers and floodways. So far neither the United States nor Canada has got an effective, coherent plan to deal with this threat to our homes, our communications, and our agriculture.
Posted by The Mound of Sound at 12:02 PM

I don't think the message will get around until a Jupiter sized hurricane removes every building from Miami to Boston. If/when that happens many people will just assume it was God's wrath and continue as before.

I came across a news feature today out of Florida. Apparently the big developers in Miami have finally awakened to the issue of sea level rise. Their response was hilarious - it's up to government (i.e. the taxpayers) to solve the problems they created for themselves by failing to take sea level rise into account in their design and construction of super expensive but environmentally inadequate buildings.

Miami is a w/o. Porous limestone. Build a seawall and the sea literally leaks up through the ground.
But watching Miami may be a prelude for most coastal areas
Some BC coast lines may be defensible via seawalls
If Pine Island Glacier goes, all bets are off