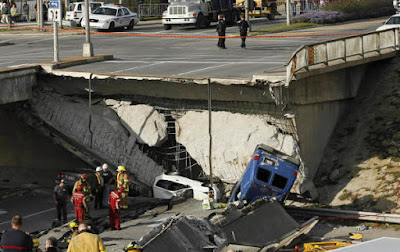 They don't have a clue. Your federal government and our various provincial governments are in the same boat. None of them has assessed the risks we face from climate change or what we need to do to adapt to it.

This is kicking the can down the road and whistling past the graveyard at the very same time.

It's so much easier if we all gaze out over the stern and pretend that iceberg off the bow isn't there at all.

This isn't misfeasance any more. It's full blown malfeasance. It's not just doing something wrongfully, carelessly, perhaps negligently.  It's deliberate wrongdoing.

They don't want to deal with this on their watch. It's too big, too scary, too fraught with political risk.

Back in June, 2014, large parts of Calgary were underwater as The World Council on Disaster Management held its annual conference in Toronto, which itself had recently experienced a freak flood.  The message was that Canada's outdated and decaying essential infrastructure was vulnerable to natural disasters.

“In terms of funding, the amounts of money are truly frightening and there’s no government in the world that can find the kind of money necessary to bring existing infrastructure up to par,” Gordon said.

The lack of political will is one of the biggest obstacles to infrastructure funding, which is why Mirza proposed that Canada adopt a best practices solution to addressing our climbing infrastructure costs.

"No government in the world can find that kind of money." Okay, but what if we don't? What if we don't replace essential infrastructure,what then? Have you ever been to a Third World country?

What we do know is that the costs of not acting, the costs of waiting until that essential infrastructure fails, will be substantially greater. That's because there will be economic loss atop the costs of replacing the infrastructure. And then you'll see "trickle down" in action with the velocity and power of a sledgehammer in freefall.

The taxes our parents' and grandparents' generations invested in that infrastructure was integral to the prosperity that their descendants, us, enjoyed. Only we also liked the idea of "everyday low taxes" which meant we didn't want to pay for those same things when it came our turn. We didn't pay for routine maintenance. We didn't pay for replacement. We haven't built for the next generations as those before ours freely did for us.

Which allows me to segue into a book I'm about to read, John Kenneth Galbraith's "The Affluent Society." First published in 1958 I've picked up the 1984 4th edition. I got  hooked by this passage from The Times Literary Supplement.


Why worship work and productivity if many of the goods we produce are superfluous - advertising 'needs' created by high-pressure advertising? Why grudge expenditure on vital public works while ignoring waste and extravagance in the private sector of the economy. Classical economics was born in a harsh world of mass poverty, and it has left us with a set of preconceptions hard to adapt to the realities of our own richer age. And so, too often, 'the bland lead the bland.' Our unfamiliar problems need a new approach.

It sounds more relevant today than ever. The problems, perhaps novel in the post-war prosperity, are now commonplace and extensive.
Posted by The Mound of Sound at 10:54 AM

We, the electorate, behave like children, Mound. We don't want to hear any truth that might disturb us, much preferring the comforting golden fairly tales our leaders spin, even at the same time as we realize they have no basis in the real world.

I'm not really sure how you make concrete plans for "weirding". We know there will be sea level rise, so the dikes and pumps in the LML are being improved, but the there's the Fraiser.

Will CC and Weirding cause the Fraiser to flash flood, ( no glaciers, big snow pack, fast melt), then dry up?

Or will CC and Weirding cause the Fraiser to be terminally low and slow, or dry and dusty, ( no glaciers, winter rain, no snowpack) ?

.. when I fly south for work or pleasure
I insist on a window seat..

Flying over Hispaniola
Haiti and Dominican Republic
I see the border
One one side, the lush tropical
The other side the blown away catastrophic

Soil washing off the land
into the Caribbean Sea

This is where current governments
wish to take Canada..
Visible from outer space ?


Jay, the standard projection I've seen is for a convergence of three factors: 1) earlier and heavy sprint snow melt and runoff; 2) continued subsidence in Richmond, parts of Surrey, even a couple of areas in Vancouver, and 3) sea level rise causing Fraser River levels to rise and leaving low-lying parts of Richmond and Surrey increasingly vulnerable to storm surges.

When it comes to climate change and precipitation the general rule seems to be that ordinarily wet areas will get wetter, dry areas more arid. Even wet areas such as coastal BC may see a lot less snowpack and more heavy winter rain which suggests they'll need to build mountain reservoirs to hold the runoff for summer needs.

Hard to say, we are in year 20 of Global Warming up here.

The pine's almost gone, replaced with Engleman Spruce and Yellow Spruce. This winter, we had snow and drifting unlike any year since the '60's, with brutal freeze thaw cycles, last year was semi normal, other than no spring or summer rains, and of course, the worst wildfire season in history, The year before that, barely any snow, +5 in January, and it rained so hard all spring and summer our road washed out, and crops rotted.

At the start of the cycle, we went from 5 years of above average wet, to 5 years of drought or just enought moisture, to now 10 years of "weird". It's been 6 years since we had "normal" winter temps of -25, lowest we've gotten is -15.

We've had winters filled with cloud and fog, with almost never a clear day.

We've had Vancouver summers at times,

We've had microbursts during storms that have flattened clusters of mature timber, ripped my windgenerator off it's mount, ( rated to 150 mph), flipped a farm truck and moved it 10 meters.