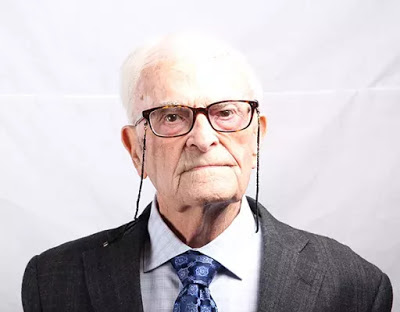 He called both England and Canada home and he was an outspoken progressive voice on both sides of the Atlantic. Harry Leslie Smith has died, age 95.

From his home in Belleville, Ontario, Harry let it be known he was no fan of Stephen Harper - or Harper's successor.

...The broken promises on electoral reform and commitments to Indigenous people and attempts to appease U.S. President Donald Trump are some of the complaints Smith has about the Liberal government.

In a Guardian interview in 2017, Harry Smith said the stench of looming war was in the air.


In the Middle East, Saudi Arabia eviscerates Yemen with the same ferocity as Mussolini did to Ethiopia when I was child in 1935. The hypocrisy of Britain’s government and elite class ensures that innocent blood still flows in Syria, Iraq and Afghanistan. Theresa May’s government insists that peace can only be achieved through the proliferation of weapons of war in conflict zones. Venezuela teeters towards anarchy and foreign intervention while in the Philippines, Rodrigo Duterte – protected by his alliance with Britain and the US – murders the vulnerable for the crime of trying to escape their poverty through drug addiction.

In November, 2013, Smith penned an op-ed in The Guardian that explained why the WWII vet had decided to no longer wear the poppy.


...I will lament their passing in private because my despair is for those who live in this present world. I will no longer allow my obligation as a veteran to remember those who died in the great wars to be co-opted by current or former politicians to justify our folly in Iraq, our morally dubious war on terror and our elimination of one's right to privacy.

...Today, we have allowed monolithic corporate institutions to set our national agenda. We have allowed vitriol to replace earnest debate and we have somehow deluded ourselves into thinking that wealth is wisdom. But by far the worst error we have made as a people is to think ourselves as taxpayers first and citizens second.

Next year, I won't wear the poppy but I will until my last breath remember the past and the struggles my generation made to build this country into a civilised state for the working and middle classes. If we are to survive as a progressive nation we have to start tending to our living because the wounded: our poor, our underemployed youth, our hard-pressed middle class and our struggling seniors shouldn't be left to die on the battleground of modern life.

In death as in his life, Harry Smith reminds us of what it means to be a progressive. A progressive is not, as many Liberals like to imagine, being something less than a Conservative.
Posted by The Mound of Sound at 7:13 AM

I just wrote about Harry's passing, Mound, but your post I think better captures the spirit of the man. May he not be forgotten.


It's odd that Harry is venerated by some who might otherwise call his disdain for the current prime minister a "Trudeau hater." The grammar's all wrong there but I'm too busy to fix it.