Harry On Social Justice and Canada 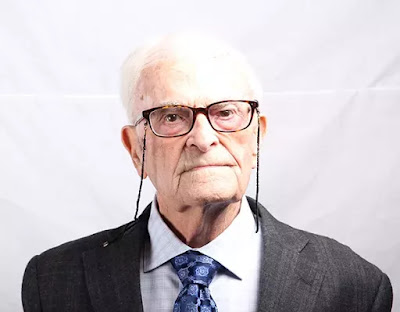 Harry Leslie Smith first came to my attention from a Remembrance Day op-ed he penned for The Guardian in 2013, "This year, I will wear a poppy for the last time."

Harry, a veteran himself, believed that the poppy had become an infomercial for the 'war without end' crowd.

Harry, now 94, splits his time between his UK homeland and his place in Belleville, Ontario. The outspoken progressive has given an interview to The Tyee in which he compares Canada's current prime minister to the guy he replaced.

“If he was saying he’d found a way to provide cheap housing to all the people who have been waiting for years… then that would be something he could be proud of,” he said. “We have too many people in this country sleeping under bridges and railways and have no hope of finding places to live.”
...

Smith finds the oppressive humidity in Southern Ontario in July a challenge to his comfort, but he endures.

“Even with the heat, Canada in summer is the prettiest place this side of paradise,” Smith said while explaining his yearly migration. “It is just glorious.”

“He’s not giving any indication at all that he is going to be very interested in changing the lifestyle of people here in Canada,” he said. “He’s actually more interested in appeasing people above him who are telling him what to do.”

Those “above” the prime minister mostly include members of the one per cent who want leaders doing their bidding without question, Smith said.

The broken promises on electoral reform and commitments to Indigenous people and attempts to appease U.S. President Donald Trump are some of the complaints Smith has about the Liberal government.
...

And a report last week from the Chartered Professional Accountants of Canada showed income inequality and precarious work are a growing concern in Canada’s cities.

The report says the onus is on federal and provincial governments to tackle the problem, but Smith isn’t seeing an effort to solve such inequality from Trudeau.

He dismissed initiatives like the Canada Child Benefit, saying they don’t actually reduce inequality as the Liberals often claim.

Parents need affordable childcare and good wages, not payments that effectively subsidize the businesses paying their low wages, he said.

It’s all left Smith wondering where the prime minister’s heart is.

“He’s not his own man,” he said. “I have a feeling, a gut feeling, there’s someone behind him pulling strings and he’s obeying orders.”

Harry sees a ray of light in the recent ouster of the B.C. Liberal government.

"I’m so happy that it’s happened there,” Smith said. “I’m sincerely hoping it’s just the start of a rumble that will careen across the country province by province until we can get rid of all these people.”

Geez, if you New Dems are still looking for a leader, you could do worse - a lot worse - than old Harry.
Posted by The Mound of Sound at 9:17 AM

"He's not his own man," which means he is someone elses man. Central to his appeasment and wanting to be loved, is his lack of any independent thought. Smith is spot on.

"“He’s not his own man,” he said. “I have a feeling, a gut feeling, there’s someone behind him pulling strings and he’s obeying orders.”

I've said it before many times, but I'll repeat it again. About five days before voting day last election, when it became clear that JT might actually win, out of nowhere appeared Paul Martin, whispering in JT's ear in public gatherings. I thought at the time that Martin was the emissary of the big money, there to make him "understand". Paranoid? Martin wasn't smiling and cheering those last few days. He had the look of a serious man on a mission, as in "Here's the wat things are."

Martin is hogtied to the Desmarais interests and Power Corporation, the real movers and shakers in this country. Here's background:

I salute Smith. What is reproduced here of what he thinks, I find spot on. Well done sir.

While Harper was a bad suit, Justin is an empty tee-shirt. The likes of Martin and Manley are never too far away. He's been surrounded by them since the party leadership was handed to him.

I think that one of Power Corp's most significant accomplishments was in the role it played, and enlisted others to play, in the international image rehabilitation of China in the years following the Tiananmen Square Massacre. It goes on.