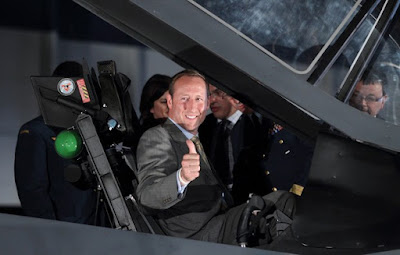 
He can’t speak French, he views the media as either a vanity mirror or the enemy, and a rubber boot has more ideas.

So why is Peter MacKay the favourite to become the next leader of the Conservative Party of Canada?

Chaos. The truth is the CPC is a hot mess at the moment. It is desperately looking for the stability of a well-known party figure to restore order. Pierre Poilievre, Rona Ambrose, and Jean Charest didn’t want the job. That is the best thing MacKay has going for him, no serious rivals, and trouble in the CPC family.

At his official campaign launch, MacKay couldn’t even manage token French, those dreadful, memorized, stumbling mutilations of the language politicians try to pass off as fluency when in Quebec. He was roasted in Quebec papers for his illiterate assertion “J’ai sera candidate.” The Journal de Quebec responded with the headline “Good Luck Mister.”

How could a guy live and work in Ottawa for more than a decade and still not be coherent in one of the country’s two official languages?

That is a question that becomes all the more damning, because so much language-training is available to MPs and cabinet ministers in the nation’s capital.

...
MacKay has yesterday’s solutions to tomorrow’s problems. That hardly passes the “Greta” test, and none of it will fly with young Canadians.

MacKay is no more electable outside the semi-friendly confines of the CPC than Harper was in 2015. The party has learned nothing from consecutive electoral defeats. It continues to blame “messaging” instead of piss poor, out of touch policy. And marching in a gay pride parade one day before Conservatives pick their leader at the convention, as MacKay has said he will, looks more like optics than a change of heart.

His signature move as a Progressive Conservative was to abandon the party’s traditions, the better to embrace the Reform vision of Harper. It was not a merger so much as a surrender.

To diehard Progressive Conservatives like David Orchard, it was also treachery. In presiding over the demise of the PC party, MacKay did exactly what he promised Orchard he would not do — lead the party into merger oblivion.

As for the value of MacKay’s resume as a Harper cabinet minister, it is highly dubious. It was MacKay who named Michael Sona as the culprit in the Guelph robocalls scandal — and he did it before Sona had been formally charged. That is not normally what justice ministers do.

As minister of defence, MacKay became famous for being photographed hopping in and out of the cockpit of a fake F-35 Stealth fighter jet. He was less forthcoming with real information about this troubled aircraft, including its mind-blowing cost and chronic problems.

It took the Parliamentary Budget Office and Kevin Page to reveal that the government had monstrously lowballed the most expensive acquisition to that point in Canadian military history. And the deception had been done deliberately, ostensibly to spare Canadians from “sticker shock” if the real price were admitted.

MacKay was also part of the CPC caucus that voted unanimously not to exempt Veterans Affairs from government-wide cuts, a move that would reduce their benefits, including their medical care.

Harper wanted to balance the budget in time for the 2015 election, regardless of whether that meant ending postal delivery, closing scientific facilities or cutting services to veterans. MacKay went along.

The follies MacKay committed during his tenure as a Harper cabinet minister were sometimes funny, sometimes outrageous.

"A hot mess." As usual, Harris zeroes in on the central problem.

.. Seems so obvious Canada eh.. has a corrupt current Liberal Government
and the Conservatives offer nothing a shred better..
NDP are lost in space..
Green Party ?
And the collusion to ensure that for Independant candidates, the deck is stacked, is obvious
The entire electoral, and governance system is in need of life support
riddled with cronyism, corruption, incompetence, idiocy or religious nuttery

Yes, Owen. I preferred the "a rubber boot has more ideas" quip. Trudeau should be deeply grateful to the Conservative Party of Canada for the less-than-worthy adversaries they keep sending to challenge him.

I don't follow Ontario politics, Sal, but the Oosterhoff name rang a bell. Let me get this right. Lecce is Ontario's minister of education. His assistant is Oosterhoff, a raving social conservative who was home schooled? Mein Gott!

... and Lecce was private schooled.

I think Steven Harper is still in control of the Conservative Party of Canada. Not formally, of course, but his old band of cronies still genuflects to his will. The fix is in for Peter MacKay because he's Harper's stooge and will do what Harper tells him to. The Party loyalists won't say or do anything to thwart Harper's wishes so MacKay is in.


Yeah, Toby, Harper isn't done with us yet.

It's true Peter MacKay has no ideas. But in a Conservative, that's kind of a plus. Whenever they DO have ideas, they're horrible ones.

Elmer, the KHS go between involving a former PM and mysterious brown bags of money.

just my opinion:
Lots of rumours/stories/accusations about Baird
He escaped them all by suddenly going into private life
He will not run.

Is Baird still in the closet? It must be crowded in there having to share space with Kenney.

Ironically, their boss is also famous for hiding in the closet!

.. 'in the closet' .. came out of the closet .. or 'came out'
Can you go back in the closet once you leave it ?
Can Stephen Harper ever truly escape his famous closet ?
In a gay context and the very public life of politics.. what ?
Who cares ? Hmm.. certain voters care !
So Baird is probably just tweaking his public image
shoring up, basic image V 4.1, upgrading
very important political person
a man of many pristine, shiny Directorships
His backtrail is catching up to him
and if he runs, the magnifying glasses come out
Verdict ? - Not electable

If only we could get Kenney to join the race too..
the virgin that's saving it for his bride ..
What a goat race that would be !!

"and here is Kenney, coming hard on the inside
and really running hard !
MacKay is fending him off valiantly though !
Baird though is really close on their rears, looking eager !
And here they all come, into the final stretch!
Ears pinned back.. now Kenney is coming, Kenny is coming !
But here comes Baird as well now.. coming with him
its like they're glued to each other !
MacKay is drifting wide.. looking gassed
blew his wad early, gave his all, nothing left
took the lead too early ? Premature so to speak.."

A couple of memories

From Appendix B to Blue Thunder: The Truth about Conservatives from MacDonald to Harper, by Bob Plamondon, Key Porter (2009)

"There are few politicians who set aside ambition for the sake of their party. Peter MacKay’s surrender of the leadership of the Progressive Conservative Party of Canada in 2003 stands tall among personal sacrifices made by a Tory leader for the good of Canada. He could easily have taken the PC party into a national election campaign, but his noble act removed the key obstacle that had kept Conservative forces divided for a decade. After Jean Chretien was given three majority governments, MacKay’s bold and unexpected move helped to restore democracy to Canada and set the stage for Stephen Harper to become prime minister."

Hey man, I think you've got the wrong smokers' trailer.